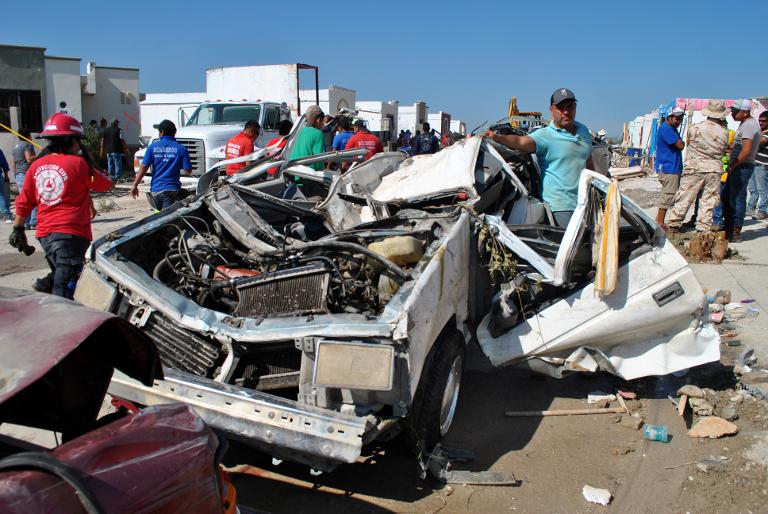 A tornado ripped into a town in northern Mexico, killing at least 13 people and flattening hundreds of homes in a deadly six-second blast of carnage, officials said.

The savage twister roared through the Mexican border town of Ciudad Acuna at dawn, tossing cars and big rig trucks into the air before they smashed into houses and buildings.

Images from the aftermath showed several crumpled vehicles resting against walls and roofs as shellshocked inhabitants of the town of 136,000 struggled to make sense of the devastation.

The tornado came as ferocious weather battered swathes of Mexico and the southern United States, where rescuers hunted for 12 people missing in flash floods across Texas and Oklahoma that left three people dead.

Coahuila Interior Secretary Victor Zamora said the death toll rose from 11 to 13. The victims include 10 adults and three children.

Almost 230 people were hurt after getting hit or cut by objects thrown by the wind, Zamora told Milenio television. Of those, 88 were still getting treatment in the afternoon.

Ciudad Acuna Mayor Evaristo Lenin Perez said a seven-year-old boy was missing, while rescuers combed through the rubble to look for any more victims or survivors.

Most of the fatalities were people who were out on the street.

“We have hundreds of houses that are practically destroyed,” Perez said, appealing for water, canned food and clothing for the victims.

The tornado whipped up as heavy rains pounded the city, with hail falling in some areas.

Three of the fatalities, including two children, were killed when a ceiling collapsed on them, local press reports said.

President Enrique Pena Nieto offered federal aid and said such tornadoes are “unusual in our country.”

Across the border in Texas, Governor Greg Abbott declared states of disaster in 24 counties as severe weather lashed the region.

“I strongly urge all Texans to exercise every possible precaution to ensure their safety and the safety of their families and neighbors,” Abbott said in a statement.

Authorities in the Texas city of San Marcos ordered residents to evacuate as flood waters rose menacingly around them, following torrential rain that turned streets into meandering rivers.

Cars and trucks were submerged and people used inflatable lounge chairs to float down the street, in surreal scenes.

As many as 400 homes in the surrounding area were destroyed, authorities said, and San Marcos opened temporary shelters to host residents who could not return home.

She said people were forming their own search parties along the Blanco River, and warned them against this, saying it was dangerous.

“We have local resources, regional and state assets that are actively doing search and rescues,” Smith told a news conference.

“It’s not safe for the general public to go down and do those rescue or search operations themselves.”

The city council said the river had broken record levels set in the 1920s.

Fire Marshal Ken Bell told CNN that at least one person was confirmed dead and crews were searching for three missing people.

At least two people also died in Oklahoma, which is located to the north of Texas.

A firefighter in the town of Claremore died when he was swept into a storm drain while trying to help a resident in floodwaters, CNN said, and a woman in Tulsa died after her car hydroplaned.

The National Weather Service warned that strong to severe thunderstorms were expected across a large stretch of the central and southern plains toward the Mississippi River Valley.