Home World Meth seizures quadruple across much of Asia-Pacific: UN 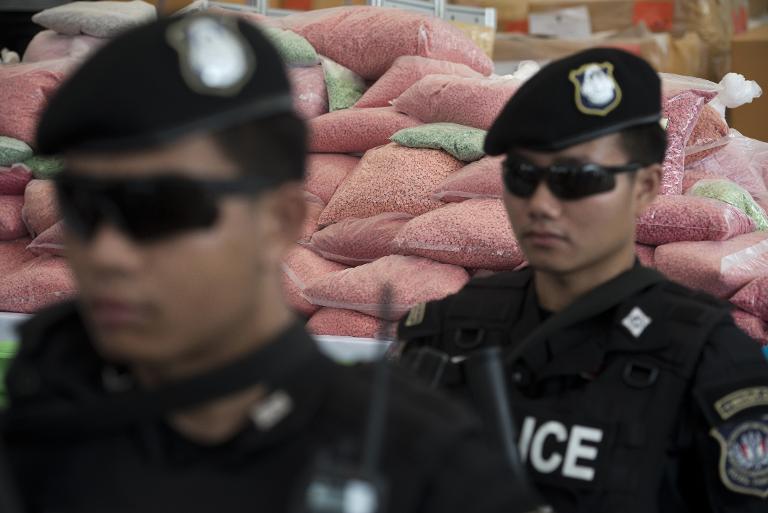 Methamphetamine seizures across much of the Asia-Pacific region have quadrupled over five years, the UN said Tuesday, citing rising wealth as one reason for a boom in production and consumption.

Growing economic integration across the region was also enabling cross-border criminal networks to cooperate in peddling amphetamine-type stimulants and so-called “legal highs”, the United Nations Office on Drugs and Crime (UNODC) said in a report.

The study, which was released in Bangkok, covers Southeast Asia, East Asia and Oceania, but excluded South Asia.

Between 2008 and 2013, the last year covered by the UNODC figures, regional seizures of methamphetamine — known colloquially as meth — rose nearly four-fold from 11 to 42 metric tonnes.

Much of the increase is down to an explosion in production of meth tablets, known in parts of Asia as “yaba”.

The drug, a potent stimulant, tends to come in two forms, a powerful crystalline variant known as “ice” or crystal meth, and the usually less pure tablets.

Between 2008 and 2013 crystal meth seizures doubled, from seven to around 14 tonnes.

South Korea, Malaysia and Singapore have all reported recent seizures of meth tablets, the UNODC said, although it is thought intended customers are likely to be labourers from the Mekong region rather than locals.

“This significant increase of seizures might partly be the result of effective law enforcement measures, ” the study said.

But the rise “also points to expanding manufacture and an increase of trafficking to and through the region as the synthetic drug market is becoming increasingly interconnected with other regions.”

The UN’s research also reported a significant increase in the production and consumption of new psychoactive substances — often colloquially referred to as “legal highs”.

These are laboratory produced chemical compounds that mimic the effects of popular recreational drugs like ecstasy and cannabis but are not yet controlled by international drug conventions.

In 2009 the number of reported new substances on regional markets was 34. By November 2014 that number had jumped to 137, with Australia, New Zealand, Singapore and Japan reporting the largest number of new substances.

The same community was raided again in February this year and a further 2.4 tonnes of meth was uncovered along with precursor chemicals.