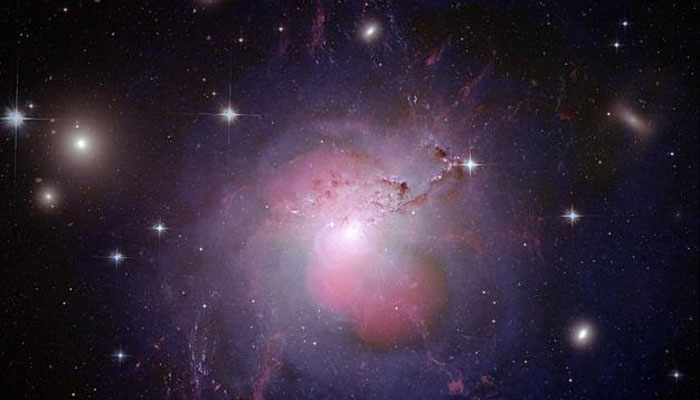 Washington: A remote galaxy shining with the light of more than 300 trillion suns has been discovered using data from NASA’s Wide-field Infrared Survey Explorer (WISE).

The galaxy is the most luminous galaxy found to date and belongs to a new class of objects recently discovered by WISE, extremely luminous infrared galaxies, or ELIRGs.

Lead author Chao-Wei Tsai of NASA’s Jet Propulsion Laboratory (JPL) in Pasadena said that they are looking at a very intense phase of galaxy evolution, adding that this dazzling light may be from the main growth spurt of the galaxy’s black hole.

The brilliant galaxy, known as WISE J224607.57-052635.0, may have a behemoth black hole at its belly, gorging itself on gas. Supermassive black holes draw gas and matter into a disk around them, heating the disk to roaring temperatures of millions of degrees and blasting out high-energy, visible, ultraviolet, and X-ray light. The light is blocked by surrounding cocoons of dust. As the dust heats up, it radiates infrared light.

The new study outlines three reasons why the black holes in the ELIRGs could have grown so massive. First, they may have been born big. In other words, the “seeds” or embryonic black holes, might be bigger than thought possible.

The other two explanations involve either breaking or bending the theoretical limit of black hole feeding, called the Eddington limit. When a black hole feeds, gas falls in and heats up, blasting out light. The pressure of the light actually pushes the gas away, creating a limit to how fast the black hole can continuously scarf down matter. If a black hole broke this limit, it could theoretically balloon in size at a breakneck pace.

Alternatively, the black holes might just be bending this limit.