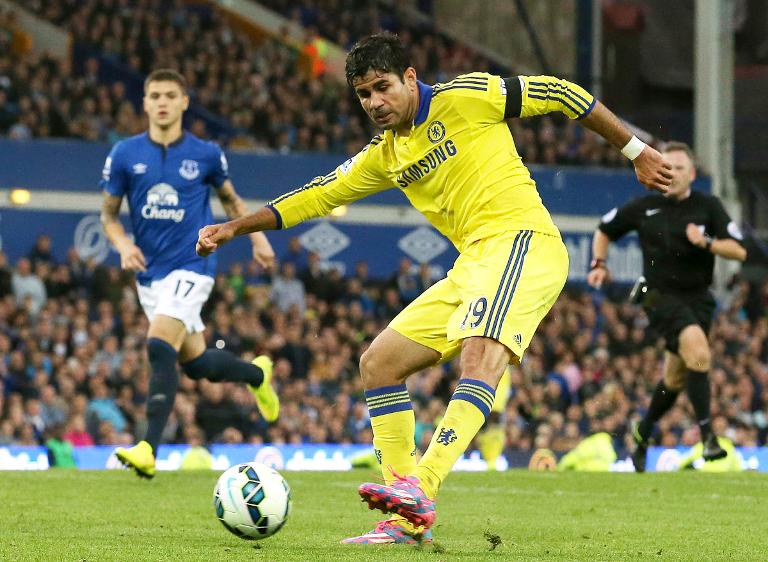 The Premier League season came to an end on Sunday after serving up nine months of thrills and spills that ended with Jose Mourinho’s Chelsea top of the pile.

Here, AFP Sports selects the five most exciting matches from the campaign:

Sweeping forward with an almost reckless abandon, Jose Mourinho’s reshaped Chelsea struck twice in the first three minutes as they fired a warning to their title rivals at Goodison Park. Sparked by the astute signings of Diego Costa and Cesc Fabregas, Chelsea showed why they were already established as the pace-setters in a title race they would eventually win at a canter. Brazil-born Spain striker Costa netted in the first and last minutes at Goodison to provide a fitting coda to a result that foreshadowed Chelsea’s march to their first Premier League title since 2010.

Displaying an abundance of attacking talent and more significantly, the frailties that would eventually undermine their respective title challenges, two of the league’s most eye-catching teams served up a cracker at the Emirates Stadium. Sergio Aguero gave City the lead mid-way through the first half, but Jack Wilshere and Alexis Sanchez — giving an early glimpse of what would prove a fine debut season — struck after the interval for the Gunners. That should have been enough to ensure a winning Arsenal debut for Danny Welbeck, fresh from his transfer from Manchester United, but City defender Martin Demichelis bagged an 83rd-minute equaliser for the defending champions.

Louis van Gaal’s startled expression spoke volumes after the new Manchester United manager’s first real experience of the chaotic nature of the Premier League. It had already been a rocky start for Van Gaal in his first season in charge, but even the well-travelled Dutchman could not have expected a meltdown of the magnitude that United experienced against promoted Leicester at the King Power Stadium. Leading 3-1 after a dominant opening, featuring a superb scooped strike from club-record signing Angel di Maria, United then capitulated, leaking four goals in 21 second-half minutes as they were run ragged by former non-league forward Jamie Vardy. Incredibly, it was the first time in 853 Premier League matches that United had let a two-goal lead turn into a defeat.

With three minutes left at Loftus Road, Liverpool looked on course for a fairly unmemorable 1-0 victory courtesy of a Richard Dunne own goal — then all hell broke loose. First, Chile forward Eduardo Vargas equalised with his first goal for QPR, then Philippe Coutinho restored Liverpool’s lead in the 90th minute. There was still just enough time left for a sensational twist in the tale when Vargas levelled deep into stoppage time, only for Steven Caulker’s own goal to hand Liverpool the points with virtually the last touch of a breathless finale.

A brilliant demolition of Chelsea’s previously impregnable defence served as a spectacular coming-of-age party for Tottenham striker Harry Kane. Playing as though they were still suffering a hangover from the New Year’s Eve celebrations, the Blues could not cope with the power and lethal finishing of 21-year-old Kane in just their second defeat of a season with few other bum notes. Kane struck twice either side of a Danny Rose goal and an Andros Townsend penalty, giving rampant Tottenham a lead that even their occasionally porous back four could not squander. Nacer Chadli sealed victory for Spurs, with Costa, Eden Hazard and John Terry netting in vain for the visitors.