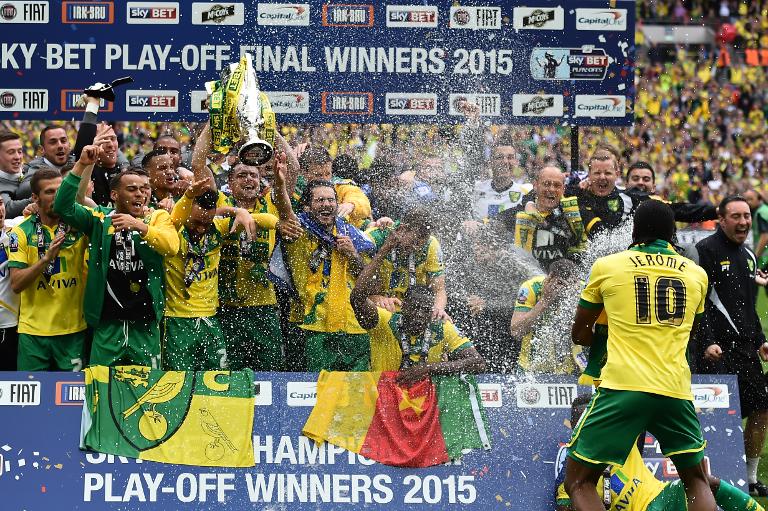 Norwich City won the promotion jackpot as they swept back into the Premier League with a 2-0 victory over Middlesbrough in the Championship play-off final on Monday.

Alex Neil’s side raced into a two-goal lead inside the first 15 minutes at Wembley thanks to goals from Cameron Jerome and Nathan Redmond and that early blitz was enough to secure an immediate and lucrative return to the Premier League just 12 months after the pain of relegation.

Promotion is worth an estimated Â£120 million ($185 million), but, while the cash is important to Norwich’s prosperity, it was the thought of taking their place alongside the likes of Chelsea and Manchester United that fuelled the jubilant celebrations at the final whistle.

Winning promotion in such style will also add to the growing reputation of the 33-year-old Neil, a fiery Scot who has already earned comparisons with former Manchester United manager Alex Ferguson and seems to have the midas touch when it comes to the play-offs.

Neil guided Hamilton into the Scottish Premiership via the play-offs last season, and now he has led Norwich to promotion in the same fashion after a remarkable 17 wins in the 25 games since he was hired to replace the sacked Neil Adams.

“We worked so hard to get here and I believed we would do it, but it’s one thing believing it and another thing doing it,” Neil said.

“Big players arrive on the big stage and you saw that in the first 20 minutes. We were unbelievable.”

Middlesbrough’s team bus had been caught in the busy bank holiday traffic en route to Wembley, arriving later than expected.

Aitor Karanka’s players appeared unsettled by that disruption and the flaws that would undermine them were immediately on display when a sloppy Dean Whitehead clearance fell to Norwich midfielder Bradley Johnson, who smashed a left-footed strike against the crossbar.

That narrow escape prompted a brief surge of adrenaline from Middlesbrough as they charged straight down the other end and hit the bar themselves through Jelle Vossen’s curling 25-yard drive.

But, fatally, Middlesbrough couldn’t quell their nerves and more lackadaisical defending proved their downfall in the 12th minute.

Whitehead put his team-mate Daniel Ayala in trouble with a slow backpass and Jerome pounced to devastating effect.

He muscled Ayala off the ball and advanced into the penalty area before guiding a cool finish past goalkeeper Dimitrios Konstantopoulos from a tight angle at his near post.

Jerome’s 21st goal of the season was a terrible one to concede and Karanka’s team still looked shell-shocked when Norwich swept forward to double their lead three minutes later.

This was a far more emphatic strike from Neil’s team, whose confidence, already high after their play-off semi-final win over bitter rivals Ipswich, had gone through the roof in the moments after Jerome’s opener.

They swaggered towards the penalty area in blur of quick passes before Steven Whittaker played a precise ball into Redmond, the young Norwich winger matching the quality of the approach play as he a touch before driving a fine finish into the far corner.

Despite beating Norwich twice this season, Middlesbrough had been completely over-run and spent the rest of the half just trying to recover their composure.

It didn’t help that Patrick Bamford, the gifted young striker loaned to Karanka by his friend and Chelsea boss Jose Mourinho, struggled to make an impact as Norwich’s industrious midfield cut off the supply lines.

After a first half that must have exceeded their worst nightmares, Middlesbrough made a brighter start to the second period and Bamford’s shot on the turn forced a sprawling save from John Ruddy.

Ayala had a header blocked on the line by Lewis Grabban in the closing stages.

But Middlesbrough’s revival came too late to disturb Neil’s team, who cruised to the finish line while their yellow-clad fans got the promotion party started.