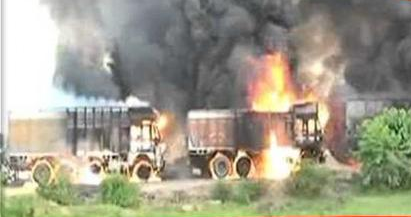 Gaya: Heavily armed Maoists torched 32 vehicles, including tankers and containers, on the Grand Trunk Road in this district on the firstday of their two-day Bihar and Jharkhand bandh on Monday.

However, nobody was injured in the attack which took placeon the route which connects Kolkata to New Delhi in the wee hours and traffic hasbeen restored.

A group of over 50 Maoists set ablaze 32 vehicles on the GTRoad near Bishunpur and Taradih villages, Patna Zonal Inspector General (IG)Kundan Krishnan said.

Among the vehicles were four tankers filled with LPG and onewith diesel. The Maoists torched the cabins of the drivers of these tankers,but the fire didÂ

not spread to the tanks, he said.

The attackers allowed a family to move to safety beforetorching their car, he said.

The Maoists have called the bandh to protest the killing oftheir Bihar Jharkhand Chhattisgarh Special Area Committee member Sarita aliasUrmila Ganjoo in an encounter with CRPF on May 16.

The IG said police teams and Gaya SSP and DIG reached thespot and the burnt vehicles had been removed.

Krishnan also said that special operations to check Maoistactivities in the area would be considered in the wake of the two-day bandh inthe Left wing extremism affected areas.