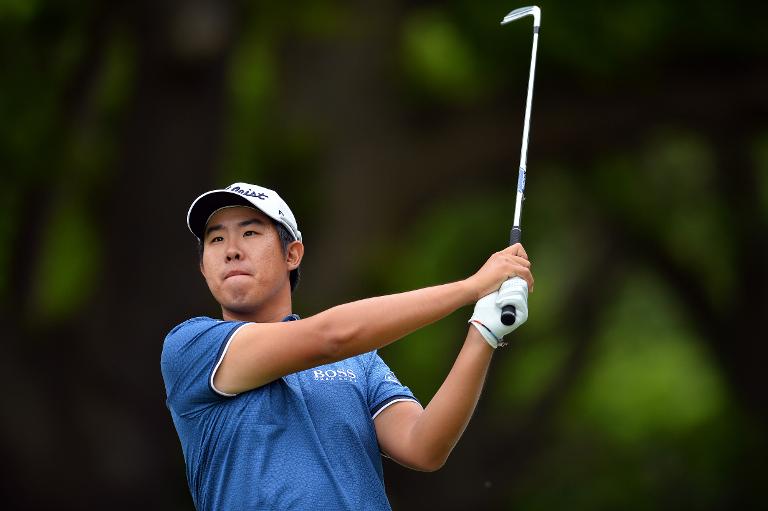 South Korea’s Byeong-hun An said his life will never be the same again after he turned the European PGA Championship into a procession winning the prestigious event by six shots at Wentworth on Sunday.

Twenty-three-year old An carded a final round 65 to finish on a tournament record mark of 267, 21-under par, beating the 19-under winning scores recorded by Scott Drummond in 2004 and Anders Hansen in 2002.

An pocketed a winning prize of 833,333 euros for the best performance of his career in his 31st event on the European Tour.

An gets a three-year exemption on the European Tour as well as the massive prize money pot and will shoot up the world rankings from 132nd place.

“I never thought I would win this event,” An told reporters.

“It’s going to be life changing. It’s the biggest event on The European Tour and you get a lot of benefits.

“This has got me into a lot of events. I’m just over the moon right now.

“It was great to go into the last hole with a sixâ€‘shot lead and especially walking off the green knowing that I’ve done it.”

On a memorable day for Asian golf Thailand’s Thongchai Jaidee finished in a tie for second on 273 alongside Spain’s Miguel Angel Jimenez and two shots clear of England’s Chris Wood who had a hole-in-one on his way to a 66.

Italy’s Francesco Molinari, who was tied for the lead with An overnight, faded to a closing 74 and fifth after leading for the first three days.

Joint runner-up Jaidee tipped An to be major player in the coming years after becoming the first Asian winner of the tournament.

He said: “It is nice to see an Asian boy win the tournament. This is a big tournament in Europe and he played really solid today.

“He’s very young and he has more confidence now. He can be the star player of the future.”

An was the youngest winner of the US Amateur when he claimed the crown aged 17 in 2009 at Southern Hills but had won just once as a professional before this win and this was his first appearance in Europe’s biggest event outside the British Open.

But he had shown form this season with a share of fifth place at the Qatar Masters being the first of three top-10 finishes.

An was tied with Molinari at 14-under par at the start of the final day, the first time he had led a European Tour event, but Molinari fell away after bogeying the first whilst An had a bogey-free front nine of 33, two-under par.

He pressed the accelerator after the turn to put daylight between himself and the rest of the field holing a birdie at the par-4 11th and making an eagle three at the 12th.

By the time he rolled in a birdie putt on the 15th, An was five clear and the rest of the field were playing for place money.

A birdie on the par-5 17th got An to 21-under the card and a solid par-5 at the last brought the curtain down on his record-breaking win and a breakthrough win for the Seoul-born player.

An became the first European Tour rookie to win the flagship event since Scott Drummond did the trick in 2004 and only the third in the history of the tournament, after Drummond and Bernard Gallacher in 1969.

Wood had a hole-in-one at the 164 metre par-3 14th, using a seven-iron, and won himself a luxury BMW i8 car on his way to fourth place.

Ireland’s Shane Lowry and Tommy Fleetwood of England shared sixth place with Lowry shooting a last-round 69 but Fleetwood who was two-under after four holes and the closest challenger to An early in the round finished with a level 72 as his challenge petered out.