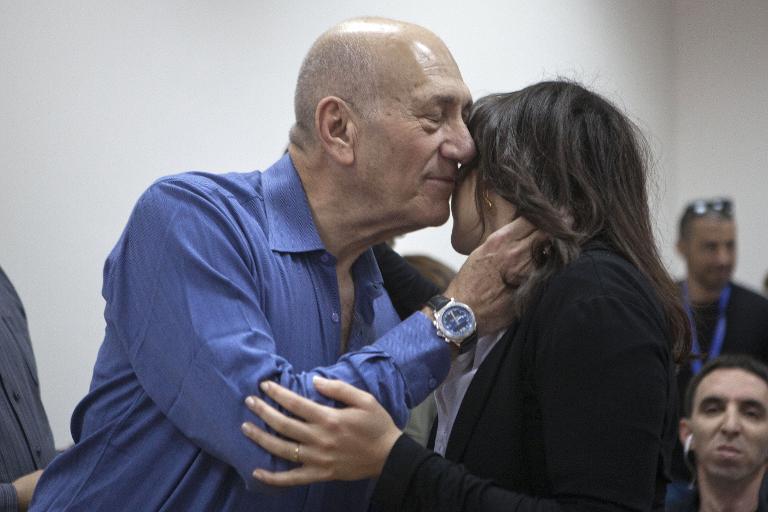 Former Israeli prime minister Ehud Olmert was sentenced to eight months in prison for corruption on Monday, the latest legal blow in a spectacular fall from grace.

Lawyers for Olmert, who served as premier from 2006 to 2009, crowning a political career spanning decades, immediately announced they would appeal.

The 69-year-old already faces a six-year prison sentence handed down in a separate bribery case which is the subject of an appeal to the supreme court.

The Jerusalem district court convicted Olmert of fraud and corruption in March following a retrial over allegations that he had received envelopes of cash from a US businessman while trade and industry minister in the early 2000s.

“A public servant — a minister — who receives cash payments in dollars, keeps them in a secret safe and uses them for personal purposes, is committing a crime which undermines the people’s confidence in public office”.

The judges also handed Olmert an additional suspended eight-month prison term and a 100,000 shekel (nearly $25,000) fine in what they said was a “light sentence in recognition of the contribution to the country made by Ehud Olmert.”

Olmert has always insisted on his innocence, describing the allegations against him as “a brutal, ruthless witch-hunt”.

His defence team said they would appeal against the judgement as there was “no evidence of personal use by Olmert” of the money handed over by US businessman Morris Talansky.

The former premier had initially been acquitted of fraud and corruption in the case, escaping in 2012 with a $19,000 fine and a suspended jail sentence for breach of trust.

But new evidence came to light during his trial in the other corruption case, and prosecutors again pressed the charges.

In return for a reduction in sentence, his former secretary and confidante Shula Zaken brought to the court secret recordings of conversations she had with Olmert in which he is heard talking about the tens of thousands of dollars he had received.

The six-year prison sentence handed down against Olmert in May last year was the first ever against a former Israeli premier for corruption.

After a two-year trial, he was convicted of taking bribes of 560,000 shekels while mayor of Jerusalem between 1993 and 2003 from the developers of the city’s massive Holyland residential complex.

Olmert resigned as premier in September 2008 after police recommended that he be indicted, but he remained in office until March 2009, when the current prime minister, Benjamin Netanyahu, was sworn in.

First elected to parliament in 1973 at the age of just 28, Olmert was the longtime protege of his predecessor Ariel Sharon, taking over as premier when his mentor lapsed into a coma from which he never recovered.

He was recognised as a key strategist behind many of Sharon’s boldest moves, including Israel’s 2005 withdrawal from the Gaza Strip and his decision to leave the rightwing Likud, now led by Netanyahu, and form the centrist Kadima party.

After Sharon’s collapse, Olmert led Kadima to victory in March 2006 on a platform of dismantling dozens of settlements and withdrawing troops from most of the West Bank.

But from that point, things began to go downhill, with his West Bank plan shelved after war with Lebanon’s Hezbollah that summer killed more than 1,200 people in Lebanon, mostly civilians, and 160 in Israel, mostly soldiers.

Unlike many of his predecessors, Olmert lacked an illustrious military background and his handling of the conflict was harshly criticised.

Although he rejected peace talks for decades, Olmert underwent a late-career conversion, relaunching the talks with the Palestinians in November 2007 after a seven-year hiatus.

In multiple meetings with Palestinian president Mahmud Abbas, Olmert offered far-reaching concessions in a bid to reach an historic deal.

But the talks were abruptly halted in December 2008 when Israel embarked upon a devastating three-week offensive in Gaza.