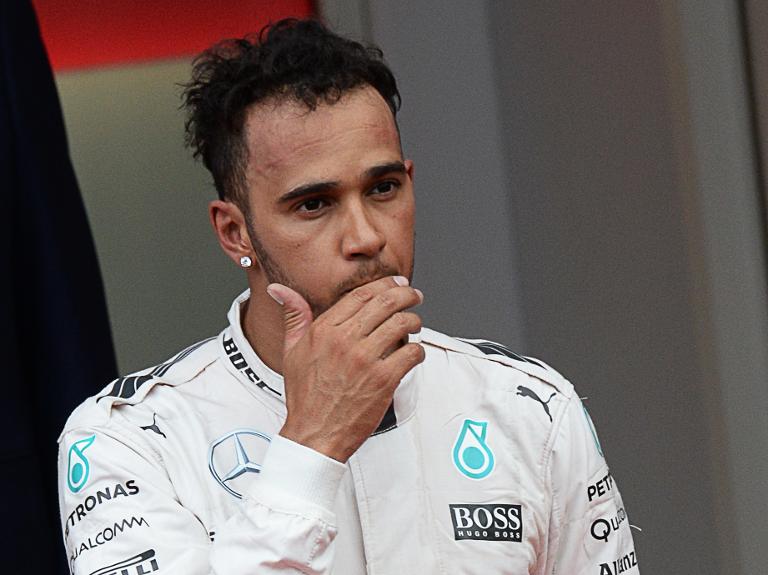 Lewis Hamilton was conspicuous by his absence on Monday as bleary-eyed reports of the post-race parties after Sundayâ€™s Monaco Grand Prix were shared over strong coffee on the Cote dâ€™Azur where, so unexpectedly, his Mercedes team-mate and rival Nico Rosberg had been given a gift-wrapped victory.

The two-time world champion and current series leader is said to enjoy a “party lifestyle” between races, but he made a quick exit to his local apartment home after his teamâ€™s spectacular tactical blunder had cost him a comfortable victory.

After performing his essential media duties with dignity, he ducked out of the annual hubbub to rest and recover. Nobody argued.

Even Rosberg, who was one of the star attractions at the Amber Lounge event at the Beach Plaza hotel after completing a rare hat-trick of successive wins on his home town street circuit, was sympathetic to his title rivalâ€™s plight.

He said he was as surprised as anyone that the team had called the race leader in for new tyres, during a Safety Car intervention, with 15 laps remaining.

“Stopping wasnâ€™t on my mind at all,” said Rosberg. “There were just a few laps to go so I just did not consider it. Instead, it was â€“ for me â€“ a big, big surpriseâ€¦ And I just thought â€˜where the hell did he go?â€™

“Then, all of a sudden, I saw wheel-banging behind me between a Mercedes and a Ferrari, and I thought ‘what the hell is going on there?â€™”

What Rosberg saw was the brief battle between Hamilton and four-time champion German Sebastian Vettel of Ferrari after the Briton had returned to the fray following his pit-stop.

The 29-year-old German, a Monegasque resident, did not delay, but pulled clear to win by 4.4 seconds, his 10th victory in Formula One.

“I know Lewis deserved to win,” he admitted. “He did a great job and I am very well aware of that. I really feel for him. Itâ€™s a horrible way to lose a race.

“I have a lot of space for empathy towards him because I know how horrible a day it is for him after such a strong weekend and to lose it right at the end like thatâ€¦ That sucks.

“On the other side a win is a win and, in sport, luck plays a big factor in all these things. So, I’ve learned to take it. I’m aware I got lucky. Very lucky… Probably the luckiest I’ve ever been in my career, but I’ll take it and enjoy it.”

As one driver celebrated and the other licked his wounds, their Mercedesâ€™ bosses began to unravel the mistakes that cost Hamilton his fourth win of the season.

“Honestly,” said Lauda. “I feel so sorry, really sorry, for him. I apologised to his engineers because for me this was unacceptable. I gave Toto an order to analyse it properly and see where the mistake was made. This decision, to bring him in, was wrong.â€

Wolff later told an impromptu media news conference that the mistake was caused by a simple mathematical error.

“What the hell happened there? That is exactly the right question,” he said.

“The simple answer is we got the math wrong, the calculation wrong. We thought we had a gap, which we didnâ€™t have, when the Safety Car came out and Lewis was behind itâ€¦.

“In Monaco, you have no GPS and that makes the whole exercise more difficult. Thatâ€™s why we got it wrong.”

He added that the team had believed Vettel might have pitted for the â€˜super-softâ€™ tyres to launch a late attack.

“It could have been a risk, at the end. We have to follow the data. That is how the squad works, but the simple thing is that the numbers were wrong.

“It was a team decision and we are to blame for thisâ€¦. It was our mistake.”

The outcome resulted in Hamilton losing victory and a luxurious 27 points lead in the title race.

Instead, he leads by 10 after six races as the F1 circus prepares for next monthâ€™s Canadian Grand Prix, where another hat-trick opportunity lies in wait for Rosberg. After his Monaco misery, Hamilton will hope for a change of luck.