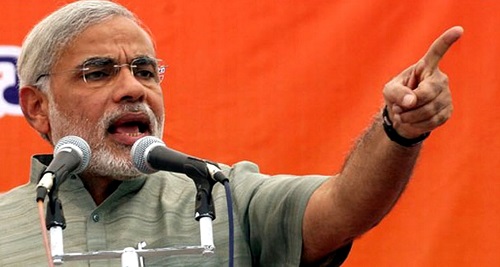 Mathura: Addressing a rally in Mathura on Monday marking the first anniversary of the BJP-led NDA government at the Centre, Prime Minister Narendra Modi reiterated his stand that his government so far has been able to successfully overshadow the misgivings of the Congress-led UPA government before them.

Accompanied by former actor turned BJP politician Hema Malini, Modi began his speech by saying, “After 30 years you gave a single party the mandate to run the government in Delhi. The day I was chosen as the leader in Parliament – I had said this government is dedicated to the poor. After 365 days, I wanted to acknowledge the source of that inspiration – the person who inspired us to work for the person at the lowest strata of society.”

Modi further said:” The hope that you see all around you, how has this changeÂ  come about? If they governed for one more year then imagine what plight of country would have been. This ‘parivartan’ isn’t due to Modi, it is due to you (the people of India).”

Confirming his stand, he said: “I had promised that I will not be Pradhan Mantri (Prime Minister) but Pradhan Santri (Prime Guard). Have I not kept my promises.”

Before finishing his speech, he said: “If India has to fight poverty, the youth of the nation must get employment opportunities. I want these small businessmen to have access to bank loans – that is why we thought of the Mudra Bank to give loans from Rs 10,000 to 10 lakhs.”