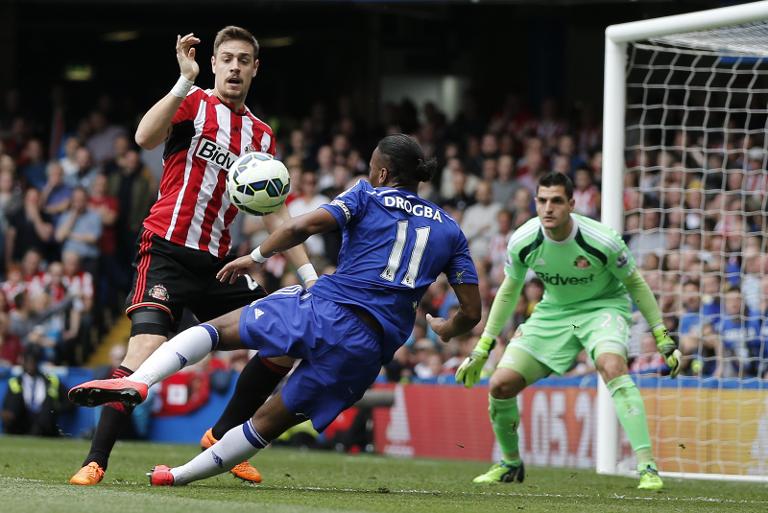 Didier Drogba’s final Chelsea game ended in curious fashion as he was carried off by his team-mates during their 3-1 Premier League home victory over Sunderland on Sunday.

The 37-year-old striker had announced prior to kick-off that Chelsea’s last competitive match of the season would be the final appearance of his second spell at the club.

But after only 30 minutes at Stamford Bridge, and with Chelsea trailing 1-0, he was chaired off the pitch by his colleagues, having apparently succumbed to injury, in what transpired was a pre-planned send-off.

Referee Lee Mason was content for Drogba to depart in such unorthodox fashion and the Ivorian’s replacement, Diego Costa, subsequently equalised for the champions, who went on to win courtesy of Loic Remy’s brace.

Drogba stood beside John Terry as the Chelsea captain received the Premier League trophy after the match and then addressed the crowd, saying: “It’s a difficult moment for me.

“This one is really special, because it’s going to be the last one as a (Chelsea) player.

“I want to thank first of all (owner) Mr Abramovich, because people keep talking about the amount of money he put in this club, but I think it’s a great investment looking on all the great years we’ve had and we’ve won everything.

“I want to say thank you to all my ex-team-mates, all the managers I played for under this shirt and a special thank you for this guy because without him and most of his assists there would not be the Didier Drogba celebration: (former Chelsea midfielder) Frank Lampard, thank you.”

Drogba returned to Chelsea last year, having previously spent eight years at the club between 2004 and 2012, winning 12 trophies and scoring the decisive penalty against Bayern Munich in the 2012 Champions League final.

The former Ivory Coast captain has contributed to Chelsea’s successes in the league and League Cup this season, but having only played a bit-part role, he has decided to leave Stamford Bridge for a second time.

Drogba joined Chelsea from Marseille in 2004 and played a key role in the team that won back-to-back Premier League titles in 2005 and 2006.

His finest hour came in the 2012 Champions League final in Munich, when he headed in an 88th-minute equaliser to take the game to extra time and then settled a penalty shootout to give Chelsea their first European Cup.

He subsequently spent time at Shanghai Shenhua and Galatasaray, before returning to Chelsea to rejoin forces with Mourinho, who had first brought him to the club in 2004.

He retired from international duty in August last year, having scored a national-record 65 goals in 104 appearances for the Ivory Coast.

Chelsea said in a statement: “Everyone at Chelsea Football Club would like to thank Didier for his fantastic service and he is always welcome back to Stamford Bridge.

“We are sure all our fans would like to join us in wishing him well for the future and thanking him for giving us so many wonderful memories.”

Terry told the BBC: “It is an unbelievable day — the whole squad have been top class from day one — but a sad one with Didier leaving today.”