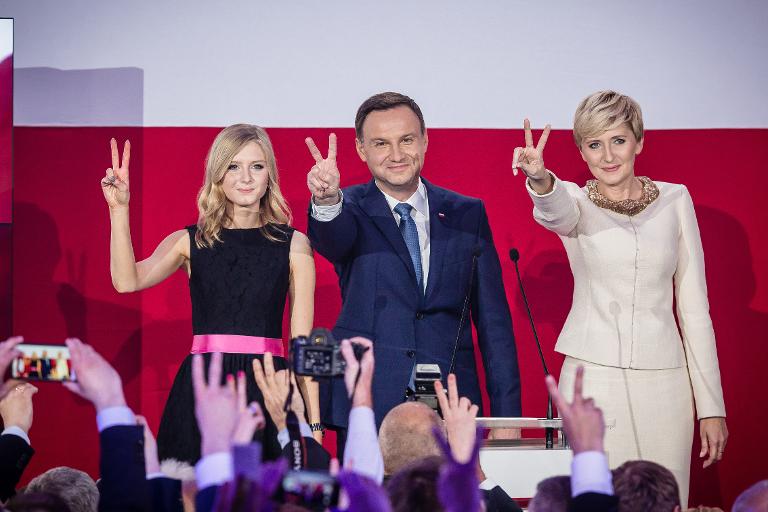 An MEP and lawyer with a populist streak, Duda scored 53 percent support ahead of Komorowski, who mustered 47 percent, exit polls showed.

The result is a stunning turnaround from expectations only a few weeks ago and gives a key indicator of the national mood ahead of an autumn parliamentary election in this heavyweight central European nation.

Analysts said voters hungry for change in the EU and NATO member state could oust the governing centrist Civic Platform (PO) in this year’s parliamentary polls and return the controversial Jaroslaw Kaczynski and his conservative Law and Justice (PiS) party to power after eight years.

“Those who voted for me, voted for change. Together we can change Poland,” the PiS-backed Duda, 43, said to wild applause at his Warsaw campaign headquarters.

Komorowski was quick to concede defeat and said his loss was also a warning signal to his political allies in government.

“I congratulate my rival, Mr Andrzej Duda and I wish him a successful presidency because I wish Poland well,” he told supporters in Warsaw.

The country’s powerful Roman Catholic church also congratulated Duda, with whom it shares an opinion on certain social issues.

“Duda’s victory signals a dramatic change on the Polish political scene,” legendary communist-era dissident Adam Michnik said, warning that a potential victory of Kaczynski’s PiS in parliament could mean that “Poland embarks on a velvet road to dictatorship.”

Kaczynski gained a reputation for being highly combative and eurosceptic during his 2006-7 stint as prime minister.

He served in tandem with his late twin brother Lech Kaczynski, who died in a 2010 plane crash in Russia.

The Polish president has limited powers but is commander-in-chief of the armed forces, steers foreign policy and has the right to introduce and veto legislation.

Duda has called for NATO to station its troops on Polish soil, amid heightened tensions with Soviet-era master Russia over the Ukraine crisis.

He has been less enthusiastic about Poland entering the eurozone, which he believes Warsaw should only do once the European single currency has solved all its debt woes.

If official results on Monday confirm a Duda victory, he will take up his new office in August.

Given his close affiliation with Kaczynski and the PiS opposition party, Duda’s cohabitation with the PO government of Prime Minister Ewa Kopacz is expected to be difficult.

A former defence minister who has been president since 2010, the 62-year-old Komorowski is allied with the PO.

A largely lacklustre campaign for the presidential race focussed on security and social issues and saw Komorowski’s initially strong lead melt away.

“I voted for Duda because I want change,” public sector worker Wieslawa Lorenc, 46, told AFP after casting her vote.

Komorowski won backing from Polish-born former US national security advisor Zbigniew Brzezinski as well as a bevy of actors and athletes.

But some supporters said they simply wanted to avoid an “unpredictable” PiS presidency.

She had backed the anti-establishment rock star Pawel Kukiz in the first round to protest the “lack of opportunity for young people on the job market”.

Analysts said Komorowski’s defeat was in large measure a signal from voters to the PO.

The party has lost support over its failure to boost employment and keep its promises in key areas like administrative and tax reform.

Ex-premier Kaczynski and his PiS party believe winning over disillusioned voters is key to making a comeback in both the presidency and parliament.

After losing to Komorowski in the 2010 presidential election, the 65-year-old Kaczynski floated Duda for president.

Poland, a country of 38 million people, has avoided recession over the last quarter of a century.

The economy is set to expand by 3.5 percent this year, but joblessness is still high and stood at 11.3 percent in April.