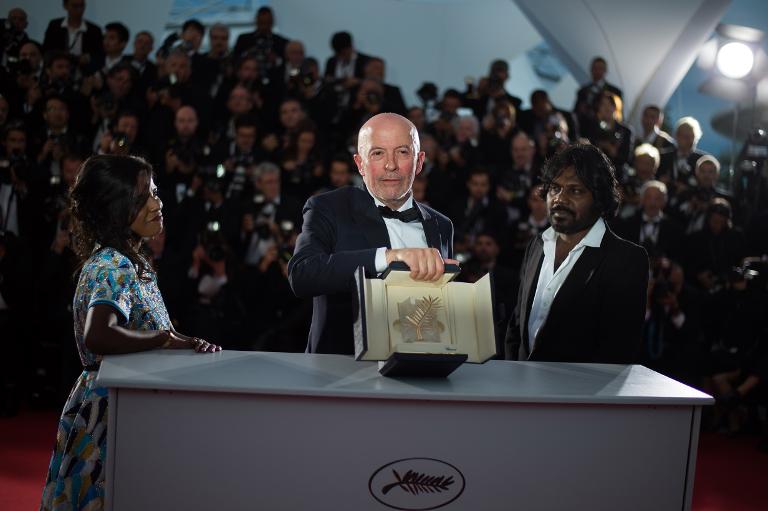 The debate around the world about what to do with growing waves of desperate migrants will be spurred by a Cannes Film Festival triumph for a movie that looks at the plight of a refugee hero.

“Dheepan”, a French movie about a Sri Lankan former soldier’s struggles in a Paris ghetto in the grip of narco-gangs, didn’t set out to tackle that wider thorny issue.

But the fact that the film’s win comes as refugee boats set off across Asian waters and the Mediterranean — the same sea lapping at glittering Cannes and its super-yachts — inevitably means it will figure in that context.

“It’s important to reflect on the situation,” the movie’s director, Jacques Audiard, admitted to reporters insistently raising the question.

But he stressed, “I started writing the screenplay four or five years ago and the situation wasn’t as critical as it is now”.

Nevertheless, “if it helps the situation, then so much the better”.

The movie won’t begin its release in cinemas for another three months. Its Cannes win will no doubt take it to countries that might otherwise have not seen it.

Some of those countries are ones grappling with the problem of immigrants.

Thousands of Bangladeshis and ethnic Rohingya leaving Myanmar are also posing a challenge for Asian nations, especially after a Thai crackdown early this month on human trafficking threw the illicit trade into chaos.

“Dheepan” keeps its action centred on its central character, a former Tamil Tiger fighter who escaped the mayhem of his war-ravaged homeland and teamed up with two strangers, a woman and a girl, to pretend to be a family to win refugee status in France.

The actor, Anthonythasan Jesuthasan, brought authenticity to the role, having actually been a teen fighter for the Tamil Tigers who escaped to Thailand, made his way to France in 1993 and eventually got political asylum.

The character, he said, is “50 percent” himself. Presumably the part of the movie where he uses his battle skills to explosively confront the Paris drug gangs is the other, fictional half.

Some of the other awards handed out at Cannes by a jury headed by the Coen brothers and including Jake Gyllenhaal nodded to different perplexing real-world issues.

A Hungarian movie taking viewers inside Auschwitz, “Son of Saul”, picked up the runner-up Grand Prize for its narrow but powerful look at the Holocaust.

And the best actor trophy went to Vincent Lindon, the star of another French movie, “The Measure of a Man”, which presents a jobless man struggling to maintain his dignity.

Joel Coen, sitting next to his brother Ethan in a post-awards press conference, said of the jury duty: “Any experience as intense as this changes your life and your perspective.”

Gyllenhaal explained the appeal “Dheepan” held for him.

“We watch three strangers, forced to travel to a foreign land, essentially learn to love each other, which is something I’ve never really seen done in the way it is in that film,” he said.

The third-placed movie was “The Lobster”, a Greek-directed dark comedy set in southern Ireland and starring Colin Farrell that imagined a society in which single people must find a mate or be transformed into animals.

The best actress award was something of an upset, confounding critics who had thought Australian star Cate Blanchett was untouchable for her turn in an American period lesbian drama, “Carol”.

Instead Blanchett’s co-star, Rooney Mara, and an actress in a French relationship drama called “Mon Roi”, Emmanuelle Bercot, ended up sharing the trophy.