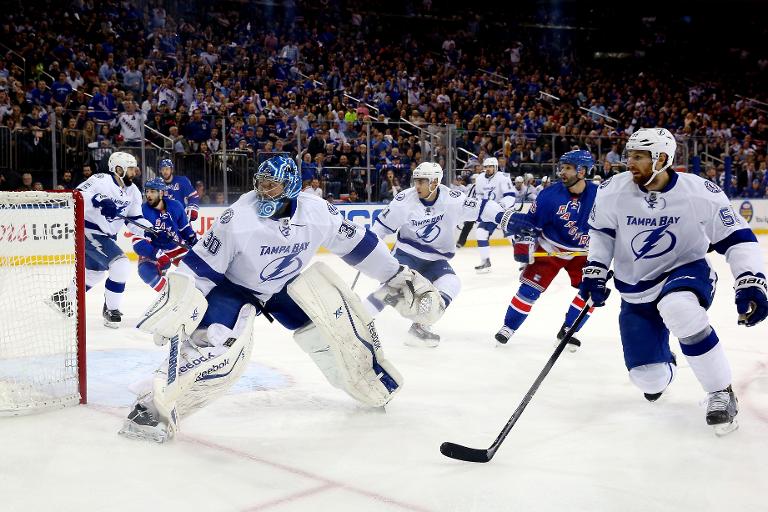 Ben Bishop rebounded from a subpar game four showing, stopping all 26 shots as Tampa Bay blanked New York 2-0, moving the Lightning to within one game of reaching the NHL finals.

Bishop bounced back with a perfect performance for his second career playoff shutout after allowing 10 goals in his previous two games in the Eastern Conference final which the Lightning now lead 3-2.

“We weren’t happy with the last couple games with the amount of scoring chances we were giving up,” Bishop said.

“We looked at it and we talked about it. I thought we did a better job tonight. Guys (were) coming up huge with blocked shots at the end there.”

Steven Stamkos finished with a goal and an assist and Valtteri Filppula also scored for Tampa Bay who can wrap up the best-of-seven series against the Rangers with a victory Tuesday in game six in Florida.

The winner of the Eastern Conference final will face either the Chicago Blackhawks or the Anaheim Ducks in the Stanley Cup finals.

Stamkos has now scored in four straight and six of his last seven games for the Lightning, who are 5-2 on the road in the playoffs. Stamkos has seven goals overall in the postseason.

Bishop got lots of help Sunday in front of a crowd of 18,000 at Madison Square Garden arena as the Lighting players blocked 24 shots and didn’t allow a goal on the four powerplays the Rangers had.

He even tried his hand at some offense, shooting the puck at the Rangers’ empty net in the final minute but he fanned on his attempt. “I was going for it,” Bishop said.

Bishop’s night didn’t start out well as he took a puck in the groin during the pre-game warmup. He managed to shake that off and made several key third period saves, including a shoulder stop on Rangers Derek Stepan to help seal the win.

Filppula opened the scoring with 6:31 left in the second period as Stamkos assisted on the goal.

Stamkos finished off a nice passing play by tapping in Ondrej Palat’s feed from atop the crease for a 2-0 lead with 1:38 to play in the second period.

“They gradually became more aggressive,” Rangers captain Ryan McDonagh said. “The last couple games we’ve been able to make that play, anticipate our next play and kind of break that pressure. Tonight we didn’t get as many of those looks, as many of those opportunities.”