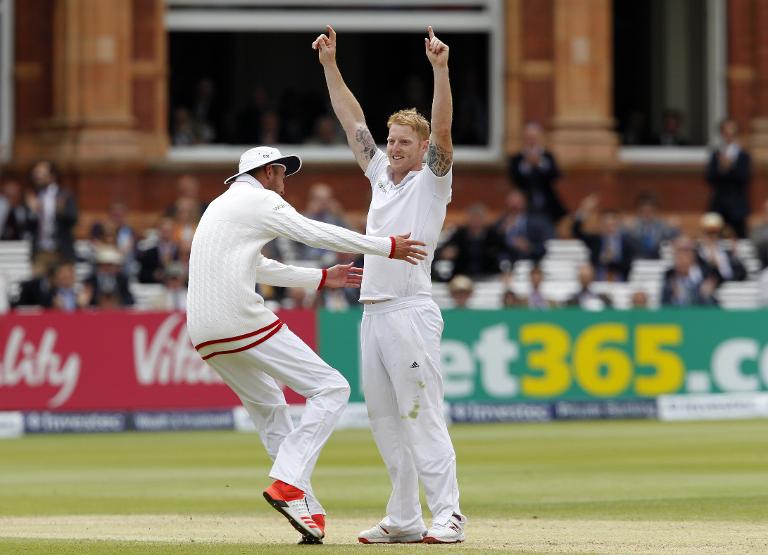 Ben Stokes followed up his record-breaking century with two wickets in two balls as England moved closer to a stunning win in the first Test against New Zealand at Lord’s on Monday.

At tea on the fifth and final day, New Zealand were 134 for five, needing a further 211 runs to reach their victory target of 345.

But, realistically, they now needed to bat through the final session to force a draw and prevent themselves going 1-0 down in this two-match series.

However, the gritty BJ Watling was 36 not out and the dashing Corey Anderson 51 not out, with their sixth-wicket stand so far worth 73.

New Zealand, who had earlier collapsed to 12 for three, found themselves 61 for five when Stokes, who on Sunday had scored the fastest Test-hundred at Lord’s, off 85 balls, struck twice in his third over.

Kane Williamson, who made 132 in the tourists’ first innings, fell for 27 when he guided Stokes to Joe Root in the gully.

And next ball New Zealand captain Brendon McCullum played on to a Stokes inswinger.

Given a roar by the crowd worthy of Ian Botham or Andrew Flintoff, Stokes, the New Zealand-born son of former Kiwi rugby league international Ged Stokes, who came to England as a 12-year-old, charged in again.

But Anderson survived the hat-trick delivery, allowing the ball to pass his stumps.

Deciding attack was the best form of defence, Anderson completed a 44-ball fifty in which 46 of his runs — 10 fours and a six — came in boundaries.

New Zealand were rocked from the very start of their chase, losing both openers for ducks without a run on the board in a match where, for the most part, they had been on top.

The second ball of New Zealand’s innings saw Martin Guptill caught in the slips by Gary Ballance off James Anderson.

Guptill’s exit left Anderson just one wicket shy of becoming only the 12th bowler and first from England to take 400 Test wickets.

And New Zealand were still on nought when Stuart Broad’s first ball of the second over had Tom Latham lbw for a golden duck.

For New Zealand, it was all starting to become horribly reminiscent of their last Test at Lord’s, in 2013, when they collapsed to 68 all out chasing 239.

Broad, who took a Test-best seven for 44 against New Zealand at Lord’s two years ago, had Ross Taylor plumb lbw for eight after having him dropped on two.

Earlier, England were dismissed for 478 after resuming on 429 for six.

England captain Alastair Cook took his overnight 153 not out — the left-handed opener’s second Test hundred in as many matches but first on home soil for two years – to 162.

But his marathon innings came to an end when he was caught behind off an inside edge to Trent Boult.

His innings extended Cook’s England record for most Test hundreds to 27.

Cook’s exit was the start of a Boult burst that saw the left-arm paceman wrap up the innings with four wickets for nine runs in 17 balls.

Boult’s final figures of five for 85 saw him gain a coveted place on the Lord’s honours board for the first time in his career.