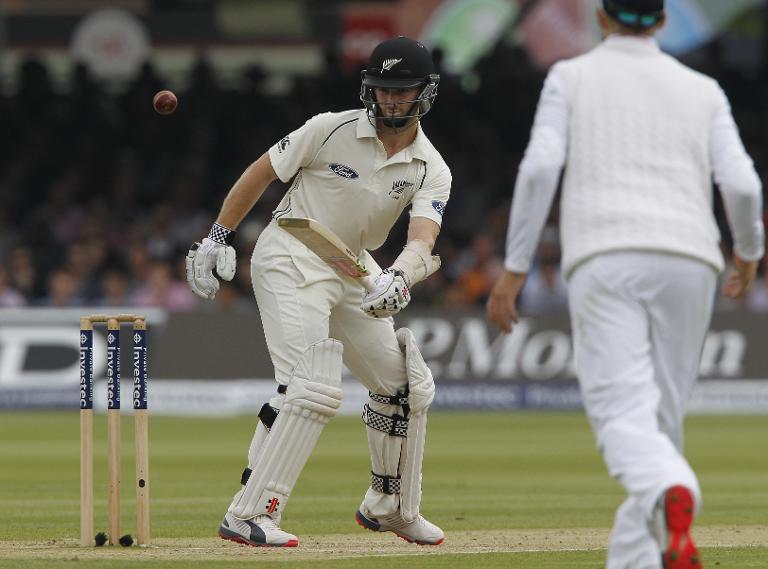 Kane Williamson starred for New Zealand as they outplayed England on the third day of the first Test at Lord’s on Saturday.

Williamson’s well-constructed 132 was the centrepiece of New Zealand’s 523 all out which gave them a first-innings lead of 134.

The Black Caps followed-up with two early wickets to reduce England to 25 for two in their second innings.

But England captain Alastair Cook (32 not out) and Ian Bell (29 not out) survived some testing overs to take the hosts to 74 for two at stumps — a deficit of 60 runs.

Williamson’s innings was all the more impressive as he was one of several New Zealand players who had only arrived in England just days before this match following stints in the Twenty20 Indian Premier League.

“It is nice to get your name on the (Lord’s honours) board but at the same time I was disappointed to get out at the stage I did,” Williamson told Sky Sports.

“The challenge is the mental transition from a shorter format to the longer one and make good decisions over a longer period of time.”

Looking ahead to the fourth day, Williamson added: “It is important that we are patient and the bowlers stick to their areas.”

New Zealand, bidding for just their second Test victory at Lord’s of all time, resumed Saturday on 303 for two, with Williamson 92 not out and Ross Taylor unbeaten on 47.

England with the new ball available just three overs after the start of Saturday’s play, opened proceedings with Ali.

Williamson promptly helped himself to five runs before a three to third man off James Anderson saw the New Zealand number three — unlike England’s Joe Root and Ben Stokes who’d both fallen in the 90s in this match — to a hundred.

Batting with impressive serenity for a 24-year-old, Williamson’s century came in just over three hours off 148 balls including 12 fours.

It was the talented stroke-player’s 10th hundred in a mere 40 Tests and the 14th by a New Zealand batsman in a Test at Lord’s.

The extra bounce on offer proved Taylor’s undoing when he fended at a rising ball from Stuart Broad and was brilliantly caught, one-handed down the legside at full stretch, by diving wicket-keeper Jos Buttler.

New Zealand captain Brendon McCullum, struck his first ball, from Broad, through cover-point for four and pulled Stokes for six.

But his typically aggressive knock ended when he miscued an attempted pull off debutant paceman Mark Wood to Root at third man.

McCullum faced just 38 balls, including six fours and a six.

Wood, denied a first Test wicket on Friday by an umpire review for a marginal no-ball, saw fortune again turn in his favour when Buttler held another superb catch to dismiss Corey Anderson off a genuine leg-glance.

“It was nice to get wickets in the end,” said Durham quick Wood, who finished with three for 93 in 27 overs.

“Once the nerves had calmed, I showed people what I could do.”

However, Wood was in no doubt about the scale of the task confronting England, adding: “There is a lot of hard work to do in this game. We need two days of good cricket

Williamson, missed on 92 and 120, was eventually out when an inside edge off his pad against Ali was caught by Gary Ballance at backward short leg.

But wicket-keeper BJ Watling, who’d spent much of England’s first innings off the field with a knee injury, struck a breezy 61 not out including 11 fours.

England conceded a wasteful 67 extras — the fifth-highest total in any Test innings.

Southee then bowled Ballance for a duck with an excellent delivery that squared up Lyth’s fellow Yorkshire left-hander.