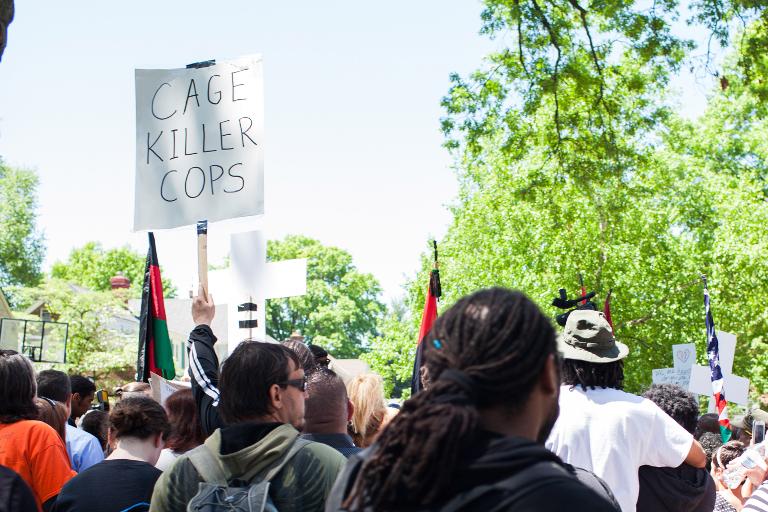 A white Cleveland police officer who climbed onto the hood of a car and fired dozens of rounds at an unarmed black couple in 2012 was acquitted of voluntary manslaughter Saturday.

The verdict, which triggered minor protests, comes amid widespread tensions in the United States over police treatment of blacks following the deaths of a number of African Americans at the hands of law enforcement.

Just a month ago, riots erupted in Baltimore over the death of 25-year-old Freddie Gray, who suffered a fatal spinal injury while in police custody. Six officers have been charged.

Cleveland patrolman Michael Brelo, 31, was one of 13 officers who opened fire on Timothy Russell and Malissa Williams during a police chase on November 29, 2012.

The couple’s car had backfired as it drove past Cleveland police headquarters, and police thought the sound was a gunshot.

A total of 137 rounds were fired at the car, including 49 by Brelo. He shot the final 15 from the hood of Russell’s Chevrolet Malibu.

Judge John O’Donnell found Brelo not guilty of two charges of voluntary manslaughter and also acquitted him of felonious assault.

Brelo had requested that a judge hear his case, not a jury of his peers.

“Proof of voluntary manslaughter requires finding beyond a reasonable doubt,” the judge said.

Brelo broke down in tears after the verdict was read out.

O’Donnell acknowledged that the United States is grappling with recent incidents of alleged police brutality and racial profiling.

He however cautioned that no single case could resolve the problem.

“The suspicion and hostility between the police and the people won’t be extirpated by a verdict in a single criminal case,” O’Donnell said.

Prosecutors had argued that Brelo’s final 15 shots from the hood of the car were unjustified because the pair was no longer able to flee the scene and therefore no longer posed a danger.

But defense lawyers argued that Brelo reasonably feared for his life.

Brelo’s lawyer Patrick D’Angelo hailed the verdict, saying his client had withstood “threats and intimidation” from prosecutors during the month-long trial.

“We stood tall, we stood firm. We didn’t do anything illegal,” D’Angelo said.

Small protests erupted in the midwestern US city after the verdict, with some demonstrators chanting “No justice, no peace” outside the courthouse.

“I’m going to tell you all something right now — we have no justice,” Williams’s cousin Renee Robinson told AFP.

Mayor Frank Jackson said an investigation into the other officers involved was ongoing.

“Now that the criminal court case has been concluded, the disciplinary process will resume for the remaining 14 officers that were involved either in the chase or the shooting,” a somber Jackson told reporters.

“To date, we have disciplined officers in a range from termination, demotion and suspension without pay.”

Jackson called for calm in Cleveland, where police stepped up patrols and were monitoring a band of up to 100 peaceful demonstrators.

“This is a moment that will define us as a city and will define us a people as we move forward and address issues around this verdict, and those that are coming in the near future,” he said.

The US Justice Department said it was monitoring the case and could yet take action.

“We will continue our assessment, review all available legal options and will collaboratively determine what, if any, additional steps are available and appropriate,” said Vanita Gupta, head of the Justice Department’s Civil Rights Division.

The case comes in the same city where Tamir Rice, a 12-year-old black boy carrying a toy gun, was fatally shot by a white police officer in November at a playground, in an incident caught on surveillance video that shocked many Americans.