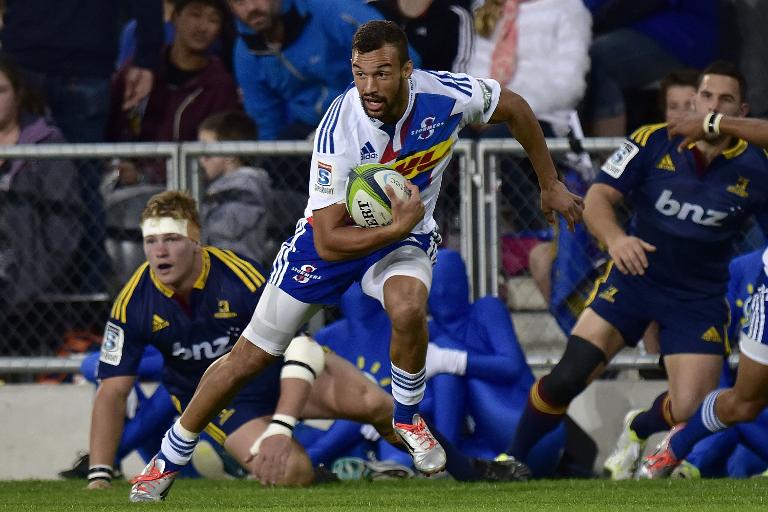 The 22-year-old winger scored late in the first half and early in the second while the home side collected four precious points in Cape Town after building an 18-7 half-time advantage.

Stormers lead the Golden Lions by two points and the Northern Bulls by three with three league rounds left in the southern hemisphere inter-provincial championship.

Three South African derbies lie ahead for the Stormers, who host the Central Cheetahs and the Lions before tackling the Coastal Sharks in Durban.

All the pre-match media attention had been on Stormers winger Seabelo Senatla, who had a quiet Super 15 debut this season after starring for South Africa in the Sevens World Series.

Senatla completed the seven-a-side circuit as the leading try scorer with 43, and a nomination for player of the series.

But it was Leyds on the other wing who stole the show and took the official man-of-the-match award before a 23,000 crowd on a Newlands stadium pitch softened by heavy pre-match rain.

His first try in opening-half stoppage time came gift wrapped from Rebels hooker Pat Leafa, whose careless pass inside the ’22’ was intercepted for a soft try.

The second try six minutes after half-time was special, and created by one of many powerful scrum shoves from the formidable Stormers pack.

Skipper and No. 8 Duane Vermeulen took the ball forward and scrum-half Louis Schreuder continued the move before Leyds cut inside a host of Rebels for a memorable score.

Fly-half Demetri Catrakilis converted for a 28-10 lead and while the Melbourne outfit battled bravely, they never seriously challenged the Stormers.

“We enjoyed the game and while a four-try bonus point would have been nice, we will take the win,” said Vermeulen.

“There are three derbies ahead and there is no love lost between South African sides. However, it will help that two of them are in front of our fantastic supporters.”

Outstanding Rebels No. 8 and skipper Scott Higginbotham said: “Reviewing this match will be painful as we committed many errors.”

Centre Damian de Allende was the Stormers’ other try scorer and Catrakilis claimed 16 points from two conversions and four penalties.