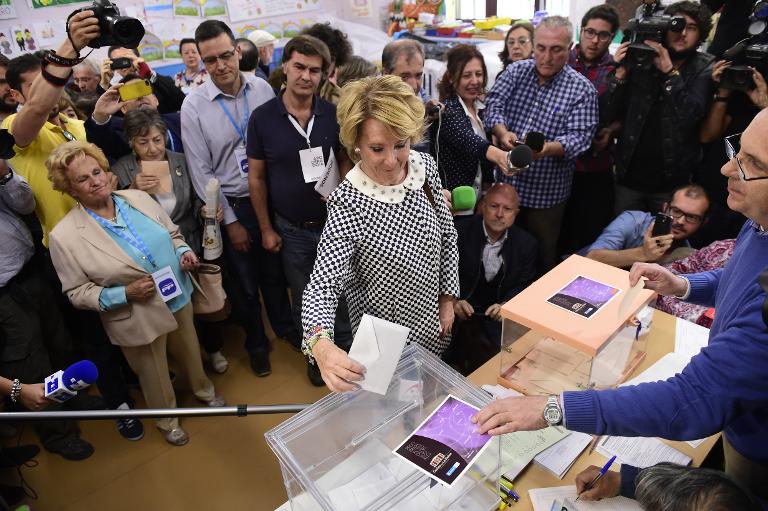 New left-wing and centrist movements are fighting to end the two-party system of the past four decades and drive out the ruling conservative Popular Party (PP).

Surging in popularity after the wave of anti-austerity protests that erupted in 2011, they vow to fight corruption and heal a country stricken by unemployment and spending cuts.

“This is the first time we have felt hopeful when coming out to vote,” said Eva Quintas, 32, after casting her ballot in central Madrid for left-wing protest party Podemos and the local group it is backing, Ahora Madrid.

Another voter, Fernando Martin, 50, said he eventually made up his mind to vote for the PP.

“These elections are important. I think there are going to be big changes,” he said. “People feel let down by politicians of all parties.”

Podemos wants to drive the PP out of power and challenge the mainstream left as the force of opposition in the eurozone’s fourth-biggest economy, as the Syriza party has done in Greece.

In the city hall elections, numerous grassroots groups opposed to the government’s austerity measures are running with Podemos’s backing.

They are polling strongly in the two biggest cities, Madrid and Barcelona.

Leading centre-left newspaper El Pais called it a choice between “the old and the new politics”. Conservative daily ABC pointed out the high level of undecided voters — some 30 percent according to polls.

Voters were being asked to choose leaders in more than 8,000 city halls and 13 of the 17 regional governments which control health and education budgets. More than 35 million people were registered to vote.

Podemos and Ciudadanos have surged over the past year to occupy third and fourth place in the polls behind the Popular Party and the mainstream opposition Socialists.

Those two parties have taken turns running Spain for more than 30 years.

“There is no doubt that a majority of Spaniards want change. What they want now are governments that make pacts and engage in dialogue,” said Jose Pablo Ferrandiz from major pollster Metroscopia.

“That is truly something new in Spain. We are not used to coalition governments.”

The polls also indicated a marked rise in turnout was likely, driven by young voters.

“This is a historic campaign for political change in Spain, just like during the transition” from dictatorship in the 1970s, Ciudadanos leader Albert Rivera said.

“In 2011 we demonstrated on the town squares. In 2015 we will throw them out of power,” Podemos leader Pablo Iglesias said.

Spain’s economic growth is gradually improving, but the unemployment rate was at more than 23 percent at the last count and anti-austerity campaigners say the recovery is not reaching the poorest.

Sunday’s vote is an important warm-up for Prime Minister Mariano Rajoy as he fights to stay in office in the general election due around November.

He warns that ejecting the PP from office could disrupt Spain’s economic recovery.

“This is not a time to experiment,” he said. “You cannot experiment with the interests of the Spanish people.”

But Ciudadanos has offered them a more market-friendly alternative and could act as an “important power broker” to keep Spain’s economic reforms on track, said analyst Christian Schulz of German bank Berenberg.