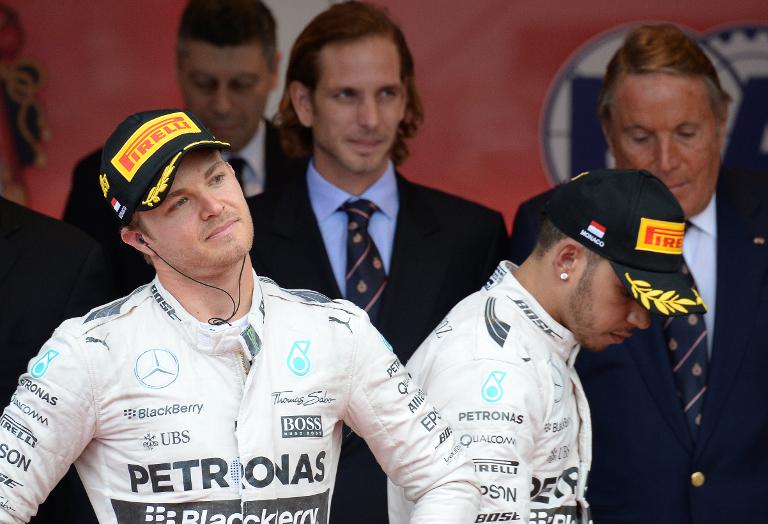 Nico Rosberg took full advantage of one of Formula Oneâ€™s greatest tactical errors on Sunday to land an unexpected victory and become only the fourth man to claim a hat-trick of consecutive wins in the Monaco Grand Prix.

The 29-year-old German — who was winning his second successive race this season — came home in his Mercedes ahead of compatriot Sebastian Vettel in a Ferrari with long-time leader and Mercedes team-mate Lewis Hamilton third.

Rosberg, who reduced the gap between himself and Hamilton in the world championship standings to 10 points after six races, trailed his team-mate for 63 laps until an accident prompted a Safety Car intervention that, in turn, led the team to call the Briton in for an unexpected and unnecessary pit-stop.

Obeying his team, Hamilton, who led by 21 seconds before he pitted, came out in third place and, after the race was re-started with eight laps remaining, found it impossible to pass Sebastian Vettelâ€™s Ferrari, let alone Rosberg, to claim his fourth victory of the year.

“Iâ€™ve lost the race, havenâ€™t I?” asked Hamilton on seeing his reversal of fortunes after exiting the pit lane.

Hamilton’s team were swift to apologise for the misjudgement, but their actions had deprived him, and the spectators, of a fair sporting outcome after he had dominated the 62nd running of this classic 78 laps contest.

“I am very happy,” said Rosberg, who was also winning two consecutive Grands Prix for the first time.

“But I know it was just a lot of luck. Lewis drove brilliantly and would have deserved the win, for sure, but thatâ€™s the way it is in racing.

“I know I got lucky. I will just enjoy the momentâ€¦”

Hamilton, who has won just once at Monaco, was remarkably relaxed about the mishap — outwardly at least.

“It was not the easiest of races,” said Hamilton.

“But the team has been amazing all year and we win and lose together.”

Asked about his mind set, he added: “Come back and win the next one.”

Mercedes director Niki Lauda said the team had apologised for the mistake.

“Yes, it was clearâ€¦ I donâ€™t know why it happened. Too much confusion. It was the wrong decision,” he said.

Team boss Toto Wolff said: “For the team, I apologise. It was a mistake.”

Until the Safety Car, after Dutch teenager Max Verstappen in his Toro Rosso had crashed at Ste Devote, it had been Hamiltonâ€™s race, but he ended up settling for a disappointed third ahead of the two Red Bulls of Russian Daniil Kvyat and Australian Daniel Ricciardo.