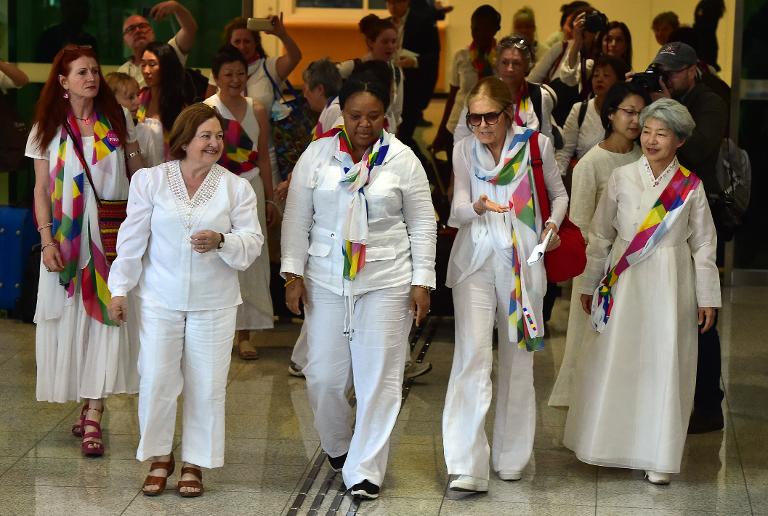 An international group of women peace activists, led by American feminist Gloria Steinem, made a rare crossing on Sunday of one of the world’s most militarised borders between North and South Korea.

The group of 30 activists rode by bus through the demilitarised zone (DMZ) separating the two Koreas in what Steinem described as a “triumph” for peace and reconciliation, dismissing criticism that the women had allowed themselves to be used as propaganda tools by the North.

“I’m so confident that once it is clear what we have experienced, these objections will go away,” Steinem told reporters on the South Korean side of the border.

Detractors argued that the group had played into the North’s hands by refusing to directly criticise its dismal human rights record during their stay in Pyongyang, where the activists held a peace gathering with North Korean women’s groups.

They also suggested the interactions at the gathering were less than genuine given that the North Korean women had likely been specially selected by the authorities.

“I know we had real human exchanges with North Korean women,” Steinem insisted.

“Nothing we do can change the image of North Korea. We are trying to make person by person connections, so that there is understanding,” she added.

The group had originally wanted to cross the DMZ through the Panmunjom “truce village”, where North and South Korean soldiers stand just metres apart in a permanent, Cold War face-off over the border.

But South Korea opposed the plan and the women finally agreed “with regret” to Seoul’s preference for a road crossing on the western part of the border.

They were also prevented from walking on foot over the actual border line, and had to move by bus instead.

Despite its name, the DMZ is one of the world’s most heavily militarised frontiers, bristling with watchtowers and landmines, and crossings through the land border are extremely rare.

With this year marking the 70th anniversary of the division of the Korean peninsula, the women said they wanted to draw attention to the need for a permanent peace treaty to replace the armistice that halted — but technically never ended — the 1950-1953 Korean War.

The group, which includes Nobel peace laureates Leymah Gbowee and Mairead Maguire, has also highlighted the anguish of divided families who have had little or no contact since the separation into North and South.

“We are here today because we don’t believe in war,” Maguire said after passing through immigration on the South side.

“You can get to human rights when you have a normal situation and not a country at war,” said Maguire, who won the 1976 Nobel peace prize for her co-leadership of the women’s peace movement in strife-torn Northern Ireland.

“The sooner we get a peace treaty signed… and normalise relationships… the quicker we will get to human rights,” she added.

On the South side of the border, the women walked around one-kilometer alongside the fencing marking the DMZ to Imjingak — a park near the border where they were met by several hundred South Korean supporters.

A small group of conservative protesters heckled the group, angered by reports in North Korea’s state media — later denied — that some of the women had praised the North’s founder leader Kim Il-Sung while in Pyongyang.

Praising North Korea or promoting its ideology is a criminal act in the South.

In an editorial in the Washington Post last week, Abraham Cooper of the Simon Wiesenthal Center and Greg Scarlatoiu of the Committee for Human Rights in North Korea, had blasted Steinem and her fellow activists for allowing North Korea to engage in “human rights theatre intended to cover up its death camps and crimes against humanity”.