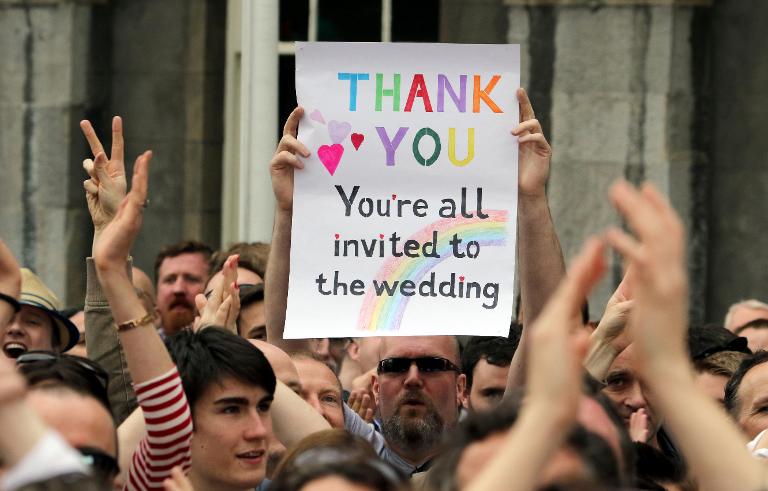 Ireland’s newspapers said Sunday that the country had dramatically changed and confirmed its emergence from the shadow of the traditionally powerful Catholic Church by voting in favour of gay marriage.

Tabloids and broadsheets alike carried colourful pictures of partying “Yes” supporters cheering the landslide referendum result Saturday as they reflected on what the decision meant for Ireland.

“A new beginning” said its front page, which carried a picture of a lesbian couple who plan to marry as others in the background jumped in the air waving the rainbow flag.

“On a fine day in May 2015 this country became a much more open, inclusive and modern society. With the mark of a ballot paper, hundreds of thousands of citizens voted by a large majority to leave behind those grey decades of a less tolerant Ireland,” the broadsheet’s editorial said.

“Ireland has changed, changed utterly… in the voice of its young people, who have declared as one that nothing will ever be the same again.”

The Irish Sun on Sunday’s front page read “Pride”, with a picture of cheering Yes supporters.

“Ireland officially emerged from the shadow of the Catholic Church yesterday to show its love and respect to people who have suffered here for centuries,” it said.

The Sunday World, Ireland’s most-read tabloid, had jubilant drag queen Panti Bliss, a key figure in the “Yes” campaign, on its front page which read “TÃ¡ll you need is love” — tÃ¡ meaning yes in Irish.

“Irish voters shook the world and sparked a massive outpouring of joy by saying a historic ‘Yes’ to gay marriage,” it said.

The Sunday Business Post had a picture of a gay couple kissing as the sun shone through giant “Yes” balloons, while inside there was a cartoon of two men in a pink car reading “just married” driving over a rainbow.

Other papers reflected on what the vote said about traditional views of Ireland.

The Irish Sunday Mirror said a “No” vote would have reinforced “tired stereotypes of a small-minded, God-fearing Catholic country”, but the result “knocked this notion out of the park”.

“The rainbow revolution,” said the front page of The Irish Mail on Sunday, hailing “a vote that confounded many expectations about modern Irish society”.

“It transformed what was a moment of doubt about modern Ireland’s self-image into a historical event overflowing with positivity,” its editorial said.

“The Irish stood up to say that ours in a country where being gay is no longer something to be afraid of.”