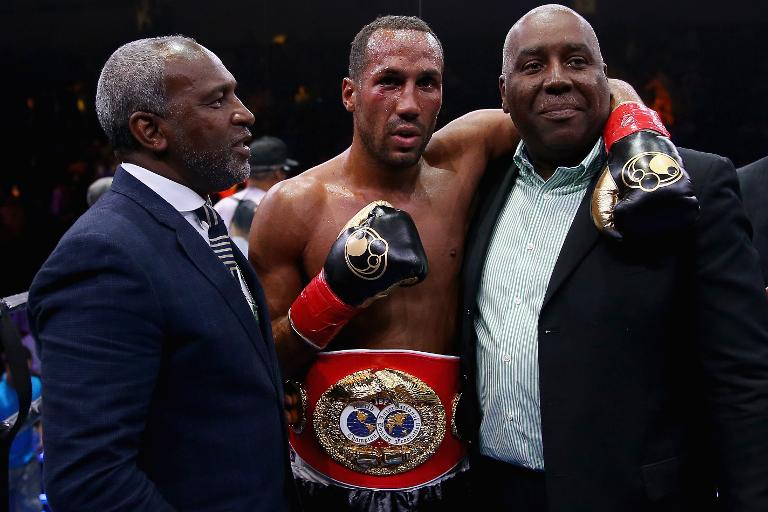 The 29-year-old Englishman knocked down the American twice in the second round, Dirrell having tasted the canvas only once before in his career, and won a unanimous decision by judges scores of 114-112, 114-112 and 117-109.

“I’m speechless. What can I say?” DeGale said. “My whole career, what I’ve been building to is winning the world title.

“It’s a wonderful feeling. I’m world champ. I made history.”

DeGale, who won the 2008 Beijing Olympic middleweight title, improved to 21-1 by winning the southpaw showdown in his US debut.

DeGale has now won 11 fights in a row since suffering his only pro loss, a 2011 majority decision setback in London at the hands of compatriot George Groves.

Dirrell, who fell to 24-2, saw his six-fight win streak snapped. The 2004 Olympic bronze medalist’s only other loss came in his only other world title bout, a 2009 split decision at the hands of Britain’s Carl Froch for the World Boxing Council super middleweight crown.

“He’s very talented,” DeGale said. “O knew I was in for a hard fight. But I was feeling good and at my best.”

Dirrell, 31, opened a cut over the right eye of DeGale early in the second round.

But DeGale flattened Dirrell late in the second round, hammering him with an overhand left to the head that sent the American to the canvas for only the second time in his career, the first time since 2008.

Dirrell rose but was stunned and DeGale knocked him down again at the end of the round, brining him to his knees against the ropes with another hard left.

DeGale staggered Dirrell again with a left to the chin against the ropes in the third round, pressing his advantage.

In the fourth round, Dirrell switched briefly from southpaw to orthodox stance and DeGale matched him, the move bringing no opening but helping blunt the Briton’s momentum.

Dirrell kept DeGale against the ropes much of the seventh round and fans began chanting “U-S-A” as the American began landing strong combinations in the eighth.

DeGale became patient and selective and Dirrell challenged him verbally late in round nine, the American saying, “Fight me” while DeGale spread his arms wide and they exchanged words after the bell.

DeGale’s best flurry since early in the fight came in the 11th round and blunted Dirrell’s momentum, leading to a 12th round that saw both fighters land combinations and raise their arms to signal victory at the final bell.