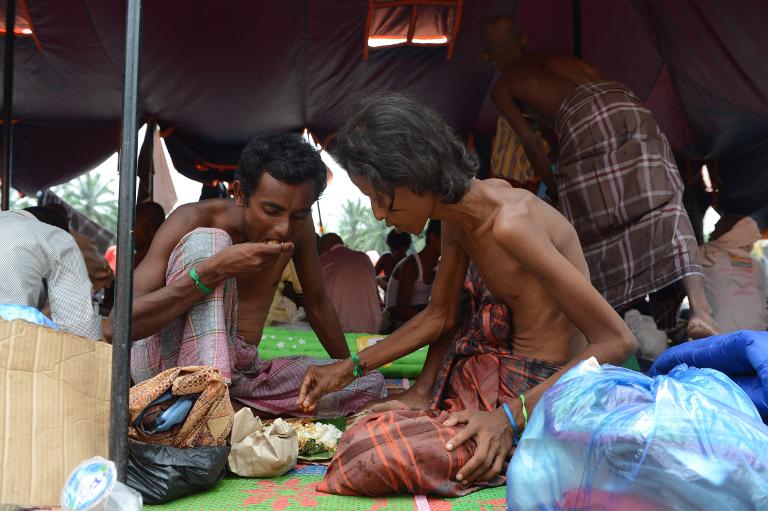 A group of migrants recently rescued by Myanmar will be deported to Bangladesh, officials confirmed Saturday, as the United Nations chief called on regional nations to prioritise saving the lives of those still stranded at sea.

Southeast Asia is currently battling an exodus of boat people fleeing persecution and poverty, with up to 2,000 vulnerable migrants thought to be stranded in the Bay of Bengal, many at the mercy of ruthless people smugglers.

Most are Muslim Rohingyas from the western Rakhine state in Myanmar, where they are not recognised as citizens and instead referred to as “Bengalis” or illegal immigrants from Bangladesh.

More than 3,500 migrants have swum to shore or been rescued off the coasts of Malaysia, Indonesia, Thailand and Bangladesh since a Thai crackdown on human-trafficking in early May threw the illicit trade into chaos.

Myanmar has faced increasing international pressure to stem the deluge from its shores and deliver urgent humanitarian relief to thousands still trapped at sea.

On Friday the country’s navy said it had carried out its first rescue of a migrant boat when scores of bare-chested men were found crammed into the hull of a wooden fishing vessel and taken to shore.

Myanmar officials say all 208 men are from Bangladesh and will soon be returned there. AFP wasn’t able to independently verify where the migrants were from.

“We are giving humanitarian assistance to them. After that we will deport them back to the relevant country,” Zaw Htay, director of the presidential office, told AFP on Saturday.

“We have made contact with Bangladeshi border officials on the ground regarding the arrived persons,” he added.

“Our commander will go himself. The entire procedure might take up to two or three days to complete,” Major Abu Russell Siddiki, a spokesman at the Teknaf border post, told AFP.

A separate law enforcement source said Bangladesh wanted to make sure Myanmar did not send any Rohingya.

The rescue by the Myanmar navy comes as fears grow for migrants still stuck at sea at a time when the dry winter months are about to give way to the regional monsoon.

UN Secretary General Ban Ki-moon said finding and saving the lives of those migrants should be a “top priority”.

Speaking during a visit to Hanoi, he called on regional nations to tackle the “root causes” of the current exodus at an upcoming conference in Thailand later this month.

“But when people are drifting on the sea, how we can search and rescue them and provide life saving humanitarian assistance, that is a top priority at this time,” he said.

The Rohingya face daily discrimination and a raft of restrictions. Many live in displacement camps after scores were killed in 2012 as violence flared between the community and local Buddhists — an event that caused a spike in people trying to flee on boats.

Most migrants aim for Malaysia and Indonesia using dangerous and lucrative smuggling networks that criss-cross the region.

Over recent years, hundreds of thousands of Rohingya and Bangladeshis have left their homes in what has become the largest regional sea migration since the end of the Vietnam War.

The smugglers largely went about their business unhindered until the crack down by Thailand on smuggling networks in the country’s south, which caused many gangmasters to abandon their victims.

Other smugglers off the coast of Myanmar have held off making the crossing because of the crackdown, instead keeping their human cargo trapped on boats moored in the Bay of Bengal.

A trickle of would-be migrants have managed to return to Myanmar after relatives raised funds to buy them back from smugglers.

But many more are thought to be still stuck on boats, and aid workers have urged countries to rescue them before the region is lashed by heavy monsoon rains.

Myanmar has seen surging Buddhist nationalism in recent years and spates of violence targeting Muslim minorities have raised doubts over its much vaunted reforms after decades of harsh military rule.

Many comments posted Saturday by readers on a Myanmar government Facebook page announcing the recent rescue were vitriolic.

“Pity. Push them back,” wrote one user.

Noble Peace Prize winning opposition leader Aung San Suu Kyi is yet to comment on the current crisis, a silence that observers attribute to fears over alienating a swathe of the electorate just months ahead of the polls.