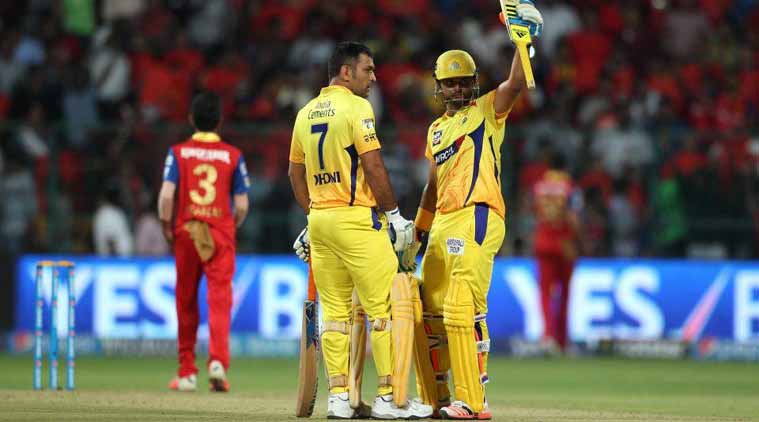 Ranchi: A clinicalÂ ChennaiÂ Super Kings on Friday defeated Royal ChallengersÂ BangaloreÂ by three wickets in a nail-bitting second qualifier to sail into the final of the IndianÂ PremierLeague cricket tournament, making it a record sixth appearance in eight editions of the event.Â

CSK rode on veteran Mike Hussey’s 56 off 46 balls to chase down the modest 140-run target with just one ball to spare.Â

Opening the batting, Hussey, the Mr. Cricket who will be 40 in another five days, anchored the CSK innings with his vast experience and decorated his knock with three boundaries and two sixes.Â

CSK will now faceÂ MumbaiÂ Indians in the summit clash of the tournament inÂ KolkataÂ on Sunday.Â

Earlier, left-arm pacer Ashsih Nehra shone with the ball as CSK produced a fine bowling display to restrict RCB to a modest 139 for eight.Â

Chris Gayle top-scored for RCB with an unfamiliar 41 off 43 balls which was studded with two fours and three sixes.Â

Young Sarfaraz Khan (31 off 21 balls) played short little cameo towards the end to give RCB bowlers something to defend. Dinesh Karthik (28 off 26) also played a good hand but just when his team need him, the wicket-keeper batsman perished in search of quick runs.Â

Chasing the modest score, CSK started on a bright note with Dwayne Smith racing off to 17 off just 11 balls with the help of three boundaries.Â

But just when he was looking dangerous Smith departed in the first ball of the fourth over, caught by Mitchell Starc off Sreenath Aravind as the batsman went for a short-arm pull.Â

It could have been double blow for CSK in the next delivery had Gayle not dropped new man Faf du Plessis at the first slip.Â

After Du Plessis, it was time for Hussey to get a life as wicket-keeper Dinesh Karthik fumbled a sharp outside edge off David Wiese’s bowling in the seventh over.Â

Even though ground fielding disappointed the side, RCB bowlers did their best to keep CSK in check by mantaining some tight line and length.