Home World Champions Bayern sign off with win over Mainz 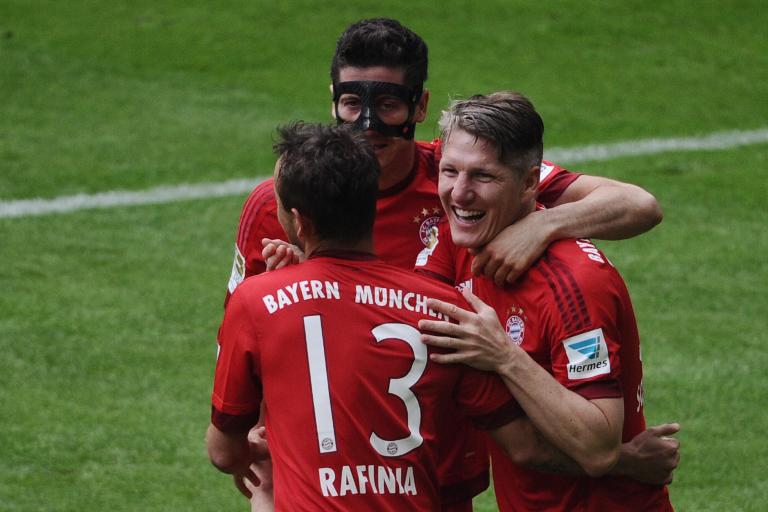 Champions Bayern Munich ended their three-match losing streak in the Bundesliga with a season-ending 2-0 win over Mainz on Saturday as Hamburg and Stuttgart avoided relegation.

A Robert Lewandowski penalty and Bastian Schweinsteiger goal saw Bayern bounce back after defeats by Leverkusen, Augsburg and Freiburg since their 25th German league title was confirmed at the end of April.

Germany captain Bastian Schweinsteiger scored their second just after the break to secure the win to kick-off celebrations in Munich as Pep Guardiola’s side was presented with the trophy at the Allianz Arena.

There were plenty of customary ‘beer showers’ on the pitch as Bayern players hunted victims over which to pour huge glasses of frothing liquid after the final whistle.

At the other end of the table, Freiburg and Paderborn went down as the relegation battle went to the wire.

Freiburg’s 2-1 defeat at Hanover 96 saw them drop to 17th and out of the league while Paderborn also return to the second division after one season in the Bundesliga with a 2-1 defeat at home to Stuttgart.

VfB Stuttgart stayed in the Bundesliga thanks to Daniel Ginczek’s winning goal for the visitors which carried them up to 14th.

Hamburg’s 2-0 win at home to Schalke means they finish 16th thanks to goals by Ivica Olic and Slobodan Rajkovic.

It means for the second year in succession, Hamburg face a two-legged relegation play-off against the side which finishes third in the second division, which will be decided on Sunday.

Roberto di Matteo’s Schalke finish sixth despite a poor end to the season which saw the Royal Blues win just two of their last ten games to miss out on a Champions League place next season.

Augsburg’s 2-1 win at Borussia Moenchengladbach saw them finish fifth to join Schalke in the Europa League for next season.

Borussia Dortmund enjoyed a 3-2 win at home to Werder Bremen on Jurgen Klopp’s final home game after seven years in charge amidst emotional scenes at the Westfalenstadion.

Dortmund finish seventh and go into the qualifiers for a Europa League, but can claim a direct place in the group stages if they beat Wolfsburg in the German Cup final next Saturday.

But Dortmund made sure of the win when Henrikh Mkhitaryan controlled Kagawa’s high pass to lob Bremen goalkeeper Koen Casteels just before the break while Czech defender Theodor Gebre Selassie scored Bremen’s late second to set up a tense finale.

Hertha Berlin finish just above the relegation places after their 2-1 defeat at Hoffenheim while Wolfsburg finished second with a 2-2 draw at Cologne.