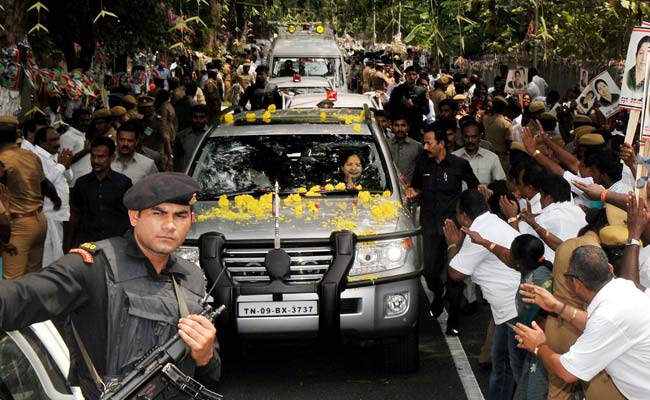 Chennai: She is back with a bang and how? Less than two weeks after she was let off the hook in a disproportionate assets case by a court, former actor and politician J Jayalalithaa on Saturday took oath as the chief minister of Tamil Nadu completing her comeback.

Jayalalithaa took the oath in the name of God in Tamil in a simple function held at the University of Madras Centenary Auditorium in Chennai.Â She was administered the oath of office by Governor K Rosaiah.Â

Jayalalithaa returned to the helm of political affairs in the state for the fifth time in her political career, eight months after she resigned for being convicted in a case by a Bangalore court.

In a unanimous decision, 67-year-old Jayalalithaa was elected as legislature party leader at a meeting of party MLAs on Friday. The decision came 11 days after she was acquitted by the Karnataka High Court in the disproportionate assets case.

Her close confidant Panneerselvam had stepped down from the post of the CM on Friday to pave way for her to take over the reigns.

Jayalalithaa’s AIADMK had won a commanding majority in the 2011 state elections. Last year, it also swept 37 of Tamil Nadu’s 39 Lok Sabha seats, which makes it the third largest party in Parliament after the BJP and Congress.