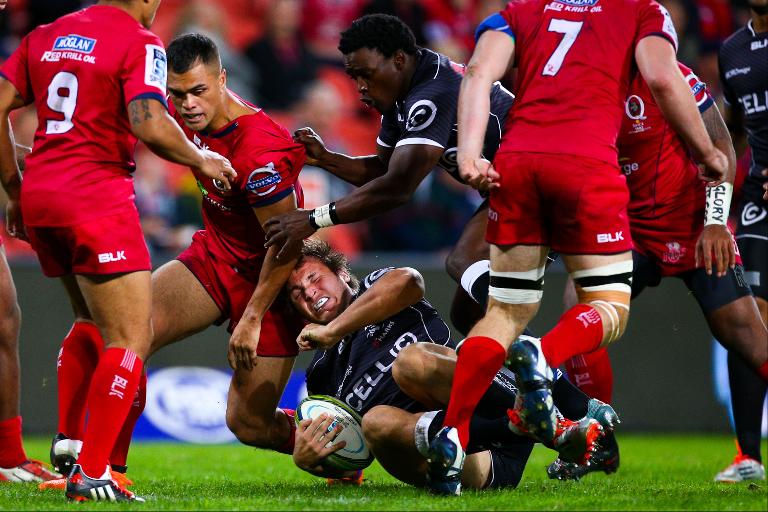 The battle-weary Coastal Sharks held on with some help from the Queensland Reds to end their four-match Australasian Super Rugby tour with a 21-14 win in Brisbane on Friday.

The Sharks, their playing ranks fully stretched by injuries after a sapping tour, looked under pressure when the Reds pulled to within two points with 30 minutes to go.

But the gritty South Africans were gifted a match-clinching second try to scrum-half Stefan Ungerer, who couldn’t believe his luck when a poor James O’Connor clearing kick went straight to him just metres out from the try-line to amble over and score.

The victory ended a six-match losing run by the Sharks, but the Reds proved their own worst enemies with 12 handling errors and 17 turnovers to crash to their 10th loss in a disastrous season.

Both sides scored two tries but Frans Steyn was the winning difference with three penalty goals — one from 47 metres — and a conversion.

“We’re just happy to get a win. It’s been a very long tour and things haven’t gone well for us this season and when that happens the knives come out,” Sharks skipper Marco Wentzel said.

“The boys stuck together, we stayed a good group and thanked the people who stuck with us, it’s hard to support a Sharks team that hasn’t been doing well.

“Marcell Coetzee was amazing over the ball as well as Bismarck du Plessis and the boys worked hard, this is great to win here.”

The Sharks got away to a 10-0 lead after Ungerer scored the first of his two tries, darting away off the base of the scrum to score on the blindside.

But Steyn kept the Sharks ahead with two penalties to lead 16-7 at halftime.

Kerevi scored for the Reds 11 minutes after half time off a Will Genia pass and O’Connor’s conversion nudged the home side to within two points at 16-14.

But O’Connor gifted the Sharks their clinching try with a shocking clearance kick from behind his try-line straight to Ungerer, who only had to run a few metres to score untouched.

The Sharks return home and face the Melbourne Rebels in Durban next weekend, while the Reds travel to Perth to play the Western Force.