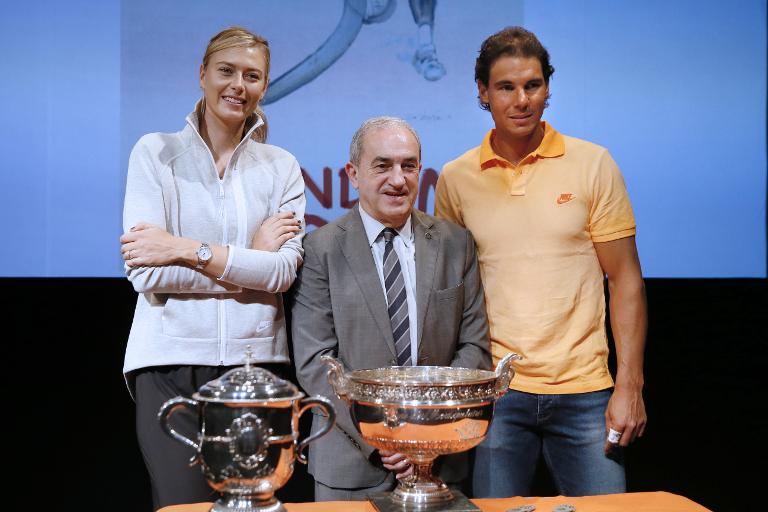 Nadal, the nine-time champion at Roland Garros and who boasts an astonishing record of 66 wins and just one defeat, comes into the 2015 tournament ranked seven in the world, his lowest in a decade.

He is also without a European claycourt title for the first time in 10 years, a run of form which has prompted many in the sport to write off the Spaniard’s chances of a 10th Paris title.

But Sharapova leapt to the defence of Nadal, a stablemate of hers at Nike.

“Everyone expects so much of Rafa at this time of year. He loses a few matches but to put so many question marks, I think it’s almost disrespectful,” said 2012 and 2014 champion Sharapova.

“He’s an incredible champion and he has no reason to be here doing it again.

“His will and motivation to keep doing it and to keep proving to himself that he can do it again is pretty remarkable.

“It’s actually been a little bit sad because if I was in his shoes I’d be a pretty accomplished and satisfied player.

“He is grinding away and proving everybody wrong.”

Nadal has been seeded six at the tournament this year despite his domination of the event and was Friday drawn in the same section of the draw as top seed Novak Djokovic with the two potentially facing off in the quarter-finals.

Roger Federer, the 2009 champion in Paris and second seed this year, believes that Djokovic, defeated by the Spaniard in the 2012 and 2014 finals, has more to fear from facing Nadal in the last eight.

“I don’t think it (the draw) was going to be bad for Rafa because he’s looking at defending his title whoever he has to play,” said the Swiss.

“It’s going to affect Novak more in my opinion in that regard than Rafa really.”

Federer added that he does not believe that Nadal should have been seeded higher despite his record in Paris and that the Spaniard’s ranking reflects his fortunes since his ninth French Open title.

“Total wrong debate in my opinion,” said the 33-year-old. “The rankings reflect what’s happened in the last 12 months.

“If Rafa had not been injured he would be close to the top four if not one or two in the world. I see the argument from that standpoint but at the same time it was going to be worse for somebody else other than Rafa.”

Meanwhile, third seeded Andy Murray insists it would be wrong to write off Nadal.

“It would be stupid to do that especially if the weather gets warm,” said the Scot.