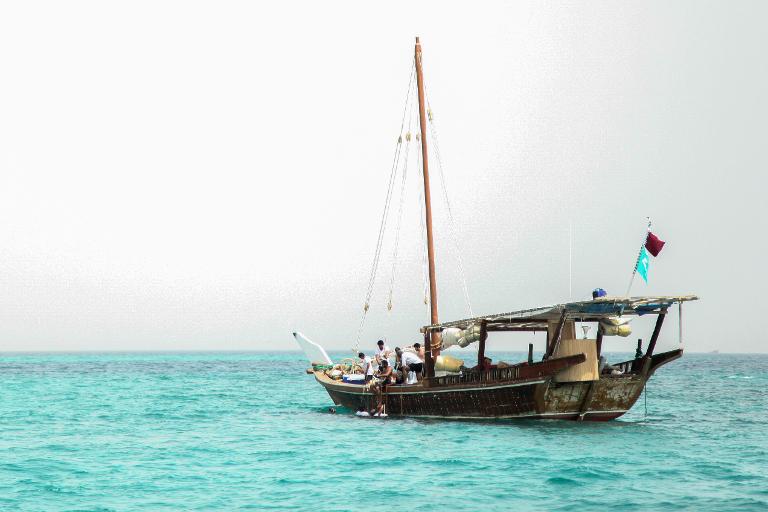 From a distance it could be a scene from Qatar’s ancient past, long before the country’s modern-day wealth was secured by the discovery of gas and oil.

Several kilometres (miles) off the coast of southern Qatar, five traditional dhow boats bob gently up and down on the becalmed blue-green waters of the Gulf.

On board each vessel are a number of gawas, or pearl divers.

In the midday heat, divers take it in turns to swim the six metres (20 feet) or so to the sea bottom unaided to find pearl oysters.

The strongest can stay underwater for about 90 seconds before returning, breathless, to the surface, hopefully with a net full of pearls, or lulus as they known in Arabic.

This is not some romanticised recreation of the past but Qatar’s biggest annual pearl diving event, the “Senyar”.

“There are four other boats,” says one of the competing captains, Mohamed bin Abdullah al-Sada.

“The total number of teams is five. There are two teams that we need to watch out for, but God willing we’ll finish ahead of them,” he adds.

But this was not to be his year.

The scene may look like a picture postcard but the closer you get to the action, it is obvious this is a serious business.

The boats buzz with activity as the teams vie for the lucrative first prize.

Each team has up to five divers, all hurriedly shouting out instructions to the others so as to find the largest number of pearl oysters.

When a diver returns to the surface with a full bag, his teammates invariably cheer and shout out to the other boats, as the competition becomes fiercer by the hour.

Also on board is the boat’s skipper, who needs a deft touch to put the dhow in the right place for the divers and a thick skin to cope with the criticism when he does not.

There is also someone there to make sure the divers have enough food — chocolates and meats — and water, while a referee sits placidly over barrels crammed with pearls oysters ready to count.

The emphasis is on oysters rather than pearls.

But collecting the most oysters is not enough to guarantee top spot. Teams are also awarded points for their treatment of the oysters.

“They decided that they should count the number of pearl oysters and not the pearls themselves because they believe that we should collect the oysters and then return them to the sea,” says Sada.

“They said we should immerse them in water and then return them to their natural environment so that they live, breed and the place stays alive. So that they’re not impacted by the annual competition.”

One year, Sada admits, his team lost first prize because they did not follow the rules.

Fellow diver Abdullah Bilal says the motive for the competition is not only money but “to keep Qatar’s heritage alive”.

“In the past it had disappeared and we want to bring it back, especially the youth who have energy and vigour.”

Pearl diving was one of the major industries in Qatar stretching from ancient times until the 1950s but, Jaidah says matter-of-factly, “when the oil came, diving stopped”.

Jaidah does not romanticise the past and speaks realistically about the hardships endured by traditional pearl divers.

They spent months away from home at sea — the oyster catching season ran from May to at least August — surviving on rations and risking their lives to get enough pearls to ensure their families had money for the winter.

“It was a very hard life,” says Jaidah.

But as modern as Qatar is now, with its gleaming glass-fronted skyscrapers, it cannot entirely break with the past.

Merchants known as “Tawash” traditionally supplied divers with food while they were at sea.

One of those Tawash was a member of the now-powerful Alfardan family which nowadays trades not in food for divers and fishermen but in luxury cars, yachts and jewellery beloved by deep-pocketed Qataris.