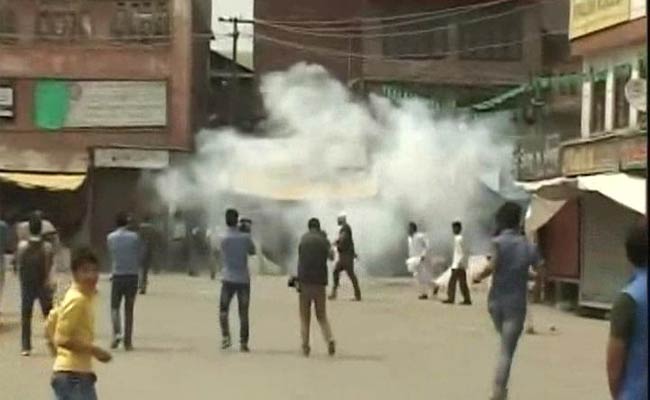 Srinagar:Â  Supporters of Kashmiri Separatist Mirwaiz Omar Farooq were seen waving flags of Pakistan and shouting pro-Pakistan slogans during a protest in Jammu and Kashmir on Friday. Flags of terror organisation Lashkar-e-Taiba were also seen.

The protesters clashed with the police and threw stones. The police used tear gas shells to disperse them.

This is the fourth time that Pakistani flags have been seen in Srinagar since April.

Two days ago, these flags were raised at a rally held by Hurriyat Chairman Farooq. On Thursday, the police placed him under arrest and imposed restrictions in some areas to prevent Hurriyat activists from holding a rally to mark the death anniversary of two leaders including Farooq’s father and Abdul Ghani.

Â On May 1, they were seen at a rally in Tral in South Kashmir, addressed by Hurriyat leader Syed Ali Shah Geelani.

Last month, hardline separatist Masarat Alam was arrested after his supporters waved Pakistani flags and raised pro-Pakistan slogans at a rally he had organized to welcome back Geelani, who is his ideological mentor.

The PDP, which co-governs the state with the BJP, has faced criticism of being soft on separatists. Masarat Alam’s release from prison earlier this year triggered a huge controversy and deeply embarrassed the BJP-led government at the Centre, which faced opposition fire in Parliament.