Home Cityscape Of power and the powerless 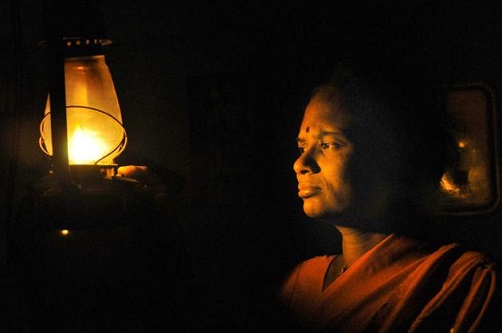 45 degrees. Sweltering, absolutely sweltering. After a long, hard day of work, we were finally home. Just as I was fixing dinner, darkness enveloped and the silence began piercing my ears. I grappled around for my phone, which was fast losing charge by now, checking the time. It was 9.35. I opened the windows and expected some sort of breeze to soothe the burning temperature, but no.

I could feel sweat trickling down my spine; thatâ€™s the worst feeling ever. And then the wait began. By now, my eyelids began to assume magnetic properties, attracting one another and refusing to stay apart.Â 10 pm, no sign of the power. 11, no, not yet. 12, no, sir, no. By now, the sweat began eroding the mask of patience with ease.

And then the fridge came to life and so did I. Clutching my now-soaked-with-sweat-pillow, I hurried into the bedroom, fearing the heat would have scared the sleep away. Just as the soft mattress sunk under my weight, the oh-so-welcome sound of the whirring fan stopped.

The hide and seek began. The power would just disappear for 45 minutes and peep in for 10 seconds, kindling hope and happiness, just to ditch again with the meanest of smirks on its dirty face. Just as the city was experiencing one of the worst heat waves, we, the middle-class taxpayers were being made to pay with our sleep. For what, we donâ€™t know.

All the big shot MLAs and other ministers would perhaps have no idea how the middle class feels. When itâ€™s hot and thereâ€™s no power, it feels like the body is being consumed by fumes. Iâ€™m not kidding, itâ€™s that hot. We all work hard, you know, to earn whatever we are earning. We deserve a good nightâ€™s sleep, because we are paying for it.

So, then, why this torture? Itâ€™s convenient to assume that something would have conked off. Fine, why not fix it then? Plus, why, just why on the hottest night? Just because we belong to the middle class doesnâ€™t mean we have to be tortured. All the Swachch Bharat can wait, first let us live.

Thereâ€™ve been 50 deaths this month in Telangana and Andhra Pradesh alone. We donâ€™t want to be statistics at the end of the day. For all the hard work that we do, the Babus enjoy a good nightâ€™s sleep in their air conditioned bedrooms, while we, the middle class, wipe the sweat and squat the mosquitoes.

We worry, for the next morning we have to pack and rush to work. If we donâ€™t, our bread and butter will be at risk. We have no choice.

We are the middle class. The poor is the vote bank, so they get power supply seamlessly. The rich, well they have alternatives. In this scorching heat, it is the middle class thatâ€™s suffering. We pay, but for othersâ€™ luxury. We have to burn. Till we raise this issue and get it fixed.

Till then, goodbye sleep.
Â