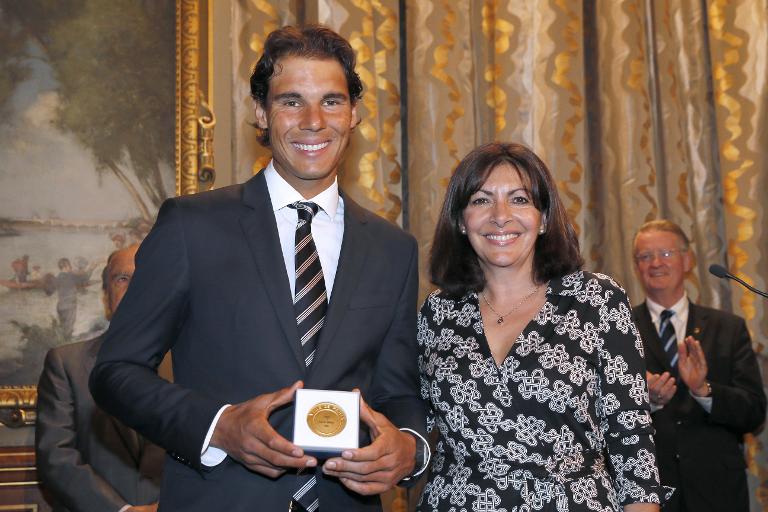 Rafael Nadal received Paris’s most prestigious honour, the “Grand Vermeil” on Thursday, just days before the Spanish superstar opens his bid for a 10th French Open title at Roland Garros.

The 28-year-old was termed “the most Parisian of Mallorcans,” as he received the honour from Paris’s Spanish-born mayor Anne Hidalgo at the city’s HÃ´tel de ville.

“Nadal has marked and continues to mark the history of Paris,” said Hidalgo. “The history of Roland Garros cannot be written without Rafael Nadal.”

Hidalgo described the 14-time Grand Slam winner and former world number one as “an exemplary champion who has always maintained his humility”.

“Rafael Nadal is a humble man who works seriously, an example for young people,” she continued.

“He’s also a generous person who has forgotten nothing of his humility and doesn’t hide behind his fame.”

Nadal described Paris as the “most important city” in his career, and the one where he “came of age as a sportsman”.

“But for me, it’s something special. This is the tournament that made me reach maturity, a life-changing moment for an athlete. And mine changed here in Paris ten years ago,” said Nadal.

“This title goes far beyond my success on the Philippe Chatrier court and it’s a great personal satisfaction for me.

“I thank those who have distinguished me with this medal which places me alongside important personalities belonging to the history of this city,” added the world number seven.

“It’s a great satisfaction for us,” his uncle and coach Toni Nadal said.

“Every time we come to Paris, it’s always special. When he was young, Rafael dreamed of winning here a few times. We were lucky enough to win nine times. We have spent a lot of time in Paris which is a very pleasant city for us.”

Nadal won his first Grand Slam title at Roland Garros in 2005 and last year added a record ninth on the Paris clay to his collection.

He was similarly honoured with a gold medal from Spanish Prime Minister Mariano Rajoy at a ceremony in Madrid earlier this month.