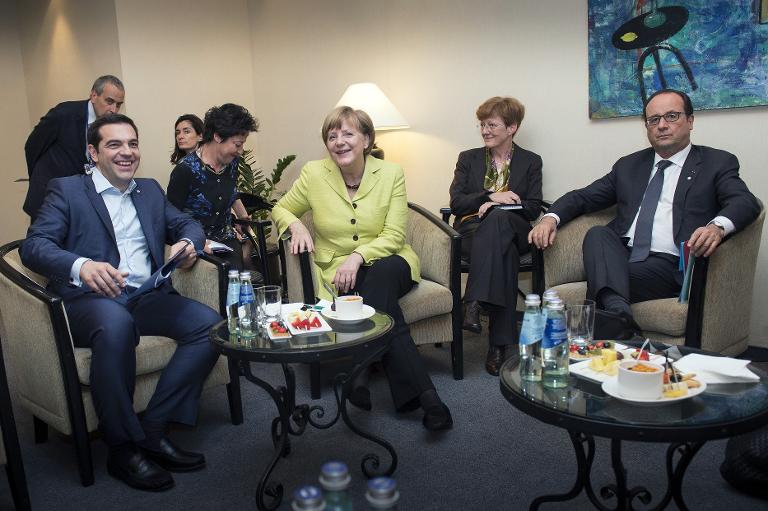 Greek Prime Minister Alexis Tsipras held “friendly and constructive” debt talks with the leaders of France and Germany, but gave no sign of a breakthrough ahead of a crucial June deadline.

German Chancellor Angela Merkel, French President Francois Hollande and the Greek premier “focused on the desire to reach an agreement on the current programme” to support Greece’s finances, an aide to the French leader said.

After almost two hours of talks the three “agreed on the need for the Greek authorities to keep working with the three institutions”, the aide said, referring to Athens’ “troika” of creditors — the European Union, the European Central Bank, and International Monetary Fund.

A Greek government source added that Merkel and Hollande “understood the need for a long-term deal” and said they were prepared to “personally contribute, if needed, to conclude the agreement soon.”

Greece’s radical-left government and its international creditors have been locked in talks for months over reforms needed to release a final 7.2 billion euros ($8.2 billion) in bailout funds Athens needs to avoid defaulting on its debt and possibly crashing out of the eurozone.

The delay in reaching an agreement has led to concerns Athens is running critically short of cash and may soon end up defaulting, which could set off a messy exit from the euro.

Spain’s Economy Minister Luis de Guindos, one of the frontrunners to take over the presidency of the Eurogroup this year, said Thursday he expects Greece will reach an agreement with its bailout creditors in the “coming days”.

Hollande stressed it was up to the European Union — not France or Germany — to find a solution to the crisis.

“It will not be here, in Riga, that we will negotiate the question of Greece, but it is true that it allows us to prepare for the upcoming deadline, particularly for the Eurogroup meeting at the end of the month or in early June,” the French president told journalists.

“Along with Mr Tsipras, we want to find solutions that will give confidence and release the… funds,” he added.

“We (France and Germany) are working to make things easier, and at the same time to pass on some messages that are useful for Greece and for Europe,” Hollande said.

On June 5, Greece must make a new debt repayment to the International Monetary Fund. It has been less than 10 days since Athens raided an emergency account to pay its last instalment of 750 million euros, and it may not be able to meet its next deadline.

The EU and IMF are demanding tough labour market and pension reforms from Greece in return for the bailout funds, however the reforms contradict the election promises that swept Tsipras’s party into power.