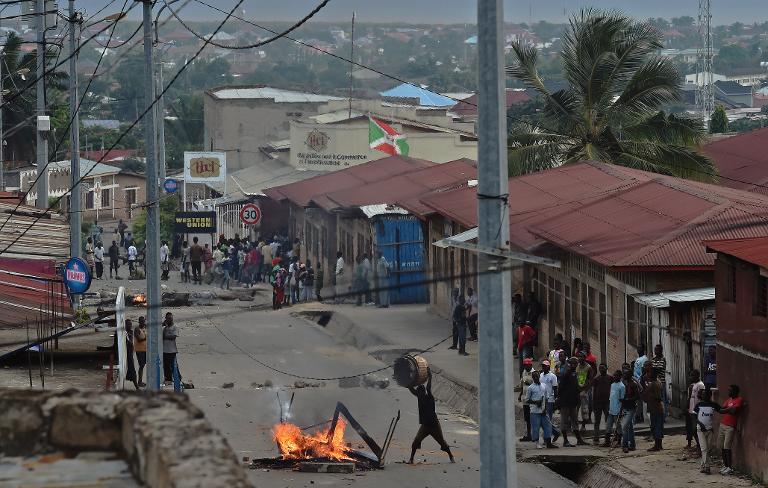 Protesters in Burundi fought intense battles with police Thursday in violent anti-government demonstrations against a third term bid for power by the president, a week on since a failed coup.

At least two protesters were shot dead and eight were wounded in clashes with police in the capital Bujumbura, the Red Cross said, the latest victims of the unrest triggered by President Pierre Nkurunziza’s bid for a third term, in which more than 20 people have died.

Heavy gunfire was heard all day in suburbs of the capital, with intense bursts of automatic weapons, as protesters in reply hurled rocks from makeshift barricades. Plumes of smoke rose from districts of the city where fighting as heaviest.

The crackle of gunfire echoed in the city as night fell, with no apparent sign of easing in the darkness, especially in the Musaga and Kanyosha districts. Police in Musaga said they had been sent to restore order “whatever the cost”.

The crisis, which began in late April after the ruling party nominated Nkurunziza to stand again in the June presidential election, deepened last week when a top general staged a failed coup attempt.

– ‘Our right to demonstrate’ –

Newly-appointed Defence Minister Emmanuel Ntahonvukiye called for unity in the wake of the abortive coup, which was crushed by loyalist forces after street fighting between rival factions.

“The survival of Burundi as a nation depends on the cohesion of the army,” a military statement read, warning that, should the army splinter, it would result in a situation seen in war-torn Somalia.

One of those killed was shot as demonstrators tried to reach the National Assembly, where three ministers were sworn in at extraordinary session.

Nkurunziza, in an address to the nation late Wednesday, said most of the central African country was secure, and that the upcoming parliamentary and presidential votes would be peaceful.

“Peace and security reign over 99.9 percent of Burundian territory and population are going about normally in their activities,” Nkurunziza said in a broadcast on state radio.

Most of the demonstrations took place in Bujumbura’s suburbs. One group of protesters briefly reached the symbolic city centre, only to be swiftly chased away by the police.

“It is our right to demonstrate our opposition to a third term of Nkurunziza, and we will continue to shout loudly despite the police,” yelled Sandrine, a 20-year-old demonstrator.

Opposition and rights groups say that Nkurunziza’s bid for a third five-year term violates the constitution and the terms of the peace deal that brought an end to a 13-year civil war in 2006.

Nkurunziza, a former rebel leader and born-again Christian who believes he has divine backing to lead, argues his first term did not count as he was elected by parliament, not directly by the people.

More than 110,000 people have fled the violence to neighbouring countries, according to the United Nations. Cholera has broken out in squalid refugee camps in Tanzania, killing at least 27 people.

Nkurunziza has urged the refugees to “come back home”, assuring them they face no security threat.

On Wednesday, his office announced that parliamentary polls set for May 26 had been postponed to June 5, but there has been no mention of rescheduling the June 26 presidential election.

Rights groups accuse Nkurunziza of launching a crackdown on opponents and independent media in the wake of the failed coup.

The presidency has dismissed the claims.