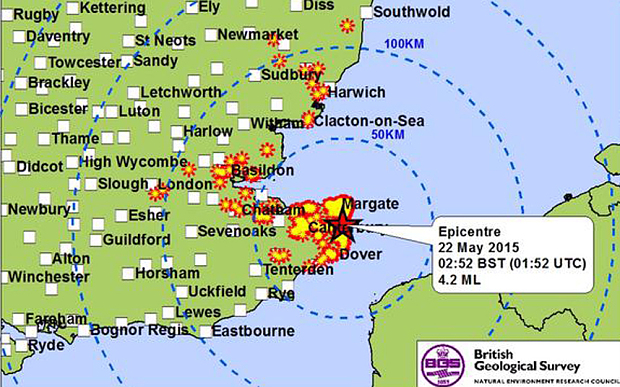 London: A moderate 4.2-magnitude earthquake on Friday struck some parts of the UK but no casualties were reported.

Seismologists at the British Geological Survey (BGS) confirmed the tremor, which was felt in areas, including Ramsgate.

A spokesman said: “It has now been confirmed parts of east Kent has been affected by an earthquake measuring just 4.3 on the Richter scale.”

Earthquakes similar in size to the one that hit Kent happen around every two years in the UK and about 4,500 times a year across the world, BGS said.

“We are aware of reports of tremors being felt by residents in East Kent & are monitoring the situation. No injuries have been reported,” police said.

Kent Police began receiving reports of the earthquake tremor in the east Kent area at around 2.57 am on Friday.

Police and Kent Fire and Rescue Services have not received any reports of structural damage or injuries.

“We will continue to liaise with our partner agencies to ensure we are providing help and support in any areas needed,” the police spokesman said.