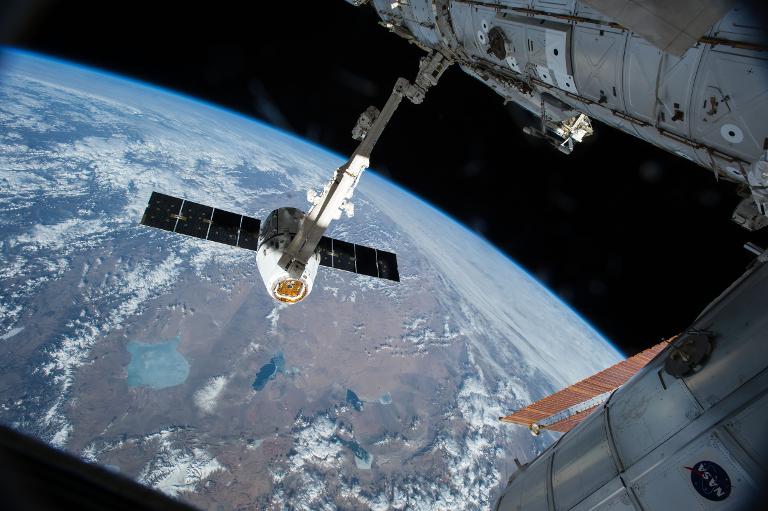 The Dragon began its journey back to Earth at 7:04 am (1104 GMT), when the US space agency broadcast images of the white capsule floating away from the space station’s robotic arm.

The vessel, aided by parachutes, splashed down in the Pacific Ocean off the coast of Long Beach, California at 1642 GMT, SpaceX said.

The Dragon is the only supply ship capable of returning to Earth intact. This time it carried some 3,100 pounds (1,400 kilograms) of cargo back from the orbiting outpost.

The spaceship launched from Cape Canaveral, Florida on April 14 and arrived at the space station three days later with a load of food and supplies.

The ISS is staffed with half a dozen global astronauts who typically live there for about six months at a time.

Two men, American astronaut Scott Kelly and Russian cosmonaut Mikhail Kornienko, are spending one year at the lab to test the limits of the human body and mind to help scientists prepare for longer, deep space missions in the future. They will depart next March.

The Dragon’s latest cargo mission is the sixth official trip of 12 scheduled as part of a SpaceX contract with NASA worth $1.6 billion.

SpaceX’s next supply trip is scheduled for June 26.

The other US commercial space station supplier, Orbital, is temporarily out of commission after its Antares rocket exploded shortly after liftoff in October 2014, destroying the Cygnus cargo craft.

Orbital said an engine failure was to blame for the explosion, citing a flaw with the decades-old Ukrainian-designed AJ-26s, that were refurbished by Aerojet Rocketdyne.

Russia’s space program has also suffered setbacks, including the recent loss of an unmanned Progress spacecraft meant to supply the ISS.

It lost contact with Earth, shortly after take-off on April 28, before disintegrating on re-entry less than two weeks later.