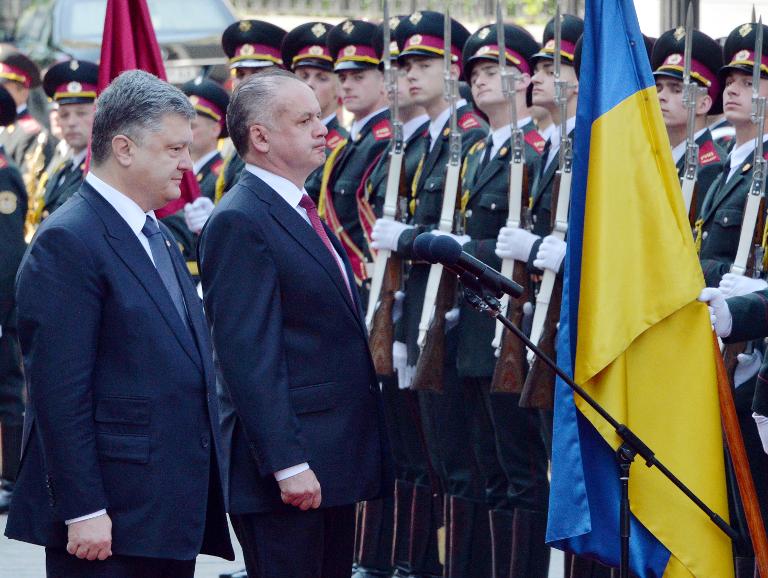 Ukrainian President Petro Poroshenko sparked fresh Kremlin fury by warning that his crisis-torn country was fighting a “real war” against Russian aggressors that could escalate at any time.

The pro-Western leader said the weekend capture of two purported Russian special forces members proved the separatist uprising in the industrial east of Ukraine was a guise for a Moscow-orchestrated campaign aimed at breaking up his ex-Soviet state.

“This is not a fight with Russian-backed separatists, this is a real war with Russia,” the 49-year-old Ukrainian leader told the BBC.

“The fact that we captured… Russian regular special forces soldiers (is) strong evidence of that.”

Ukraine’s military on Tuesday showed off two wounded Russians who had been taken prisoner during a firefight in Lugansk — a blue-collar region that together with neighbouring Donetsk revolted against Kiev’s shift toward the West 13 months ago.

The men testified during a taped interrogation that they entered the war zone nearly two months ago as part of a 200-strong reconnaissance unit from the Russian army’s Main Intelligence Directorate (GRU).

A Ukrainian Security Service spokesman said the suspects have been charged with involvement in “terrorist activity” and given a chance to phone their relatives back home.

Moscow acknowledges the presence of Russian “volunteers” and off-duty servicemen in Ukraine, but rejects charges they are there under orders from President Vladimir Putin’s generals.

But two Russian opposition activists investigating the deaths of three other GRU members said they had found fresh graves that showed they died on active duty in Ukraine.

Kiev’s detention and display before world media on Tuesday of the two soldiers captured in Lugansk has outraged the Kremlin and threatened to cement Putin’s resolve to keep Kiev within Moscow’s orbit for years.

Putin’s spokesman Dmitry Peskov said flatly that the “Kremlin does not agree” with what the Ukrainian leader told the BBC.

“First of all, one has to understand that unfortunately, Kiev is waging war against its own citizens,” Russian news agencies quoted Peskov as saying.

Hours later, Moscow accused cash-strapped Kiev of effectively defaulting on its debt repayments after the Ukrainian parliament approved a law that would allow repayments to stop if talks with creditors fail.

“The Russian state and our banks should respond adequately and use all the possible means of self-defence, including legal action,” the prime minister warned.

The accusation came after Ukraine’s cabinet decided to suspend all sales of military and advanced aerospace equipment to Russia that began under the terms of a landmark agreement signed in 1993.

The United Nations believes the more than year-long conflict has claimed at least 6,250 lives and driven more than a million people from their homes.

A second truce agreement Poroshenko struck with Putin with the help of the leaders of Germany and France in February has thus far failed to take complete hold.

Ukraine has lost at least eight servicemen since Monday in clashes across both of its renegade provinces.

Kiev blamed the violence on a new infusion of Russian troops, but agreed to hold a new round of ceasefire and political settlement talks with rebel representatives in Minsk, the capital of Belarus, on Friday.

Such talks have previously achieved little besides keeping all-out warfare from breaking out once again across the devastated region — a possibility that Poroshenko said was all too real.

“I believe they are preparing an offensive and I think we should be ready,” the Ukrainian president said.

He added that he lacked “trust” in Putin but had no choice but to seek an understanding with the Kremlin strongman.

“I doubt the release of my territory (from Russian forces) could happen by military means,” Poroshenko said.