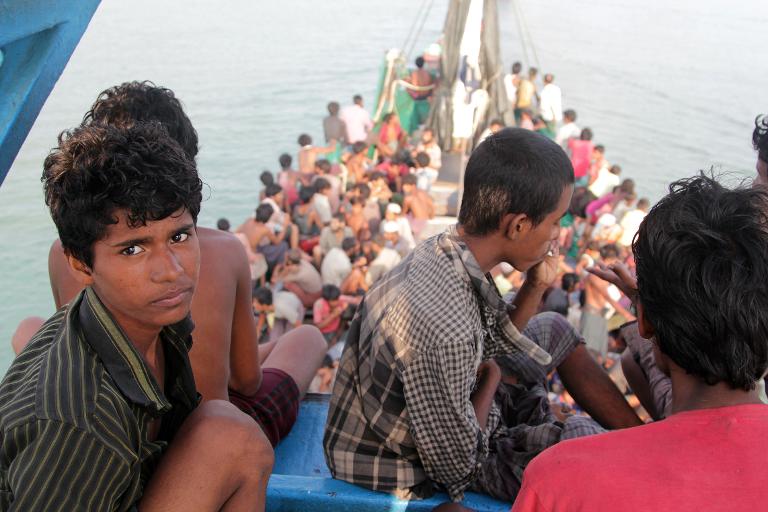 Malaysia and Indonesia said Wednesday they would no longer turn away migrants, a breakthrough in the region’s crisis that came just hours after hundreds more starving people were rescued at sea.

Earlier, Myanmar, whose policies toward its ethnic Rohingya minority are widely blamed for fuelling the human flow, also softened its line by offering to provide humanitarian aid to stricken migrants.

Malaysia, Indonesia and Thailand had sparked growing international outrage by driving off boats overloaded with exhausted and dying Rohingya as well as Bangladeshis.

But Malaysian Foreign Minister Anifah Aman, in a joint press appearance with his Indonesian counterpart Retno Marsudi, announced that “the towing and the shooing (away of boats) is not going to happen” any more.

“We also agreed to offer them temporary shelter provided that the resettlement and repatriation process will be done in one year by the international community,” Anifah said.

Thailand did not sign on to the offer, however.

It called on southeast Asian nations and the international community to “work collectively to solve this problem, which should not be left to any country alone”.

The United States said it was ready to help the region “bear the burden” of the refugees.

State Department spokeswoman Marie Harf welcomed the agreement and said the United States would help the UN set up protection centres, and would consider requests to resettle some refugees.

“The US stands ready to help the countries of the region bear the burden and save lives today. We have a common obligation to answer the call of these migrants who have risked their lives at sea,” she told reporters.

Gambia meanwhile said Wednesday it would take in all Rohingya migrants as part of its “sacred duty” to alleviate the suffering of fellow Muslims, saying it would place them in refugee camps.

Nearly 3,000 migrants have swum to shore or been rescued off the three countries over the past 10 days after a Thai crackdown on human-trafficking threw the illicit trade into chaos, with some of the syndicates involved abandoning their helpless human cargo at sea.

Anifah said Malaysian intelligence estimates that about 7,000 people are still stranded at sea.

The office of the UN refugee agency said Wednesday’s announcement by Malaysia and Indonesia was “an important initial step in the search for solutions to this issue, and vital for the purpose of saving lives”.

The United Nations High Commissioner for Refugees called for migrants to be brought ashore “without delay” and for countries in the region to address the root causes of the large-scale migration.

Joe Lowry, a Bangkok-based spokesman for the International Organization for Migration, an intergovernmental body, called the move “brave and timely”.

AFP journalists confirmed it was the same boat that had earlier bounced between Thailand and Malaysia in recent days as images of its emaciated Rohingya passengers — shot by AFP and other media — shocked observers worldwide.

Indonesian fisherman Muchtar Ali said he broke down in tears when he saw the passengers.

“I was speechless. Looking at these people, me and my friends cried because they looked so hungry, so skinny,” he told AFP.

A local official said 70 children were among those saved — including some babies — and 70 women.

Myanmar state media on Wednesday quoted a foreign ministry statement as saying the government “shares concerns” expressed by the international community and is “ready to provide humanitarian assistance to anyone who suffered in the sea”.

That marked the most conciliatory statement yet from Myanmar’s Buddhist-dominated government, which considers the Muslim Rohingya to be illegal immigrants from neighbouring Bangladesh and had earlier hit back at calls for it to help address the situation.

Rohingya flee western Myanmar by the thousands annually to escape years of violence and discrimination at the hands of the Buddhist majority.

Most head for Muslim-majority Malaysia.

US Deputy Secretary of State Antony Blinken, during a stop in Jakarta, said he would push Myanmar to improve conditions for Rohingya when he visits the country on Thursday.

“The only sustainable solution to the problem is changing the conditions that led (Rohingya) to put their lives at risk in the first place, and that is one of the things that we will be talking about tomorrow with the government of Myanmar,” he said.

The Bangladeshi migrants are largely seeking to escape poverty at home.

The UNHCR believes at least 2,000 migrants may be stranded on boats off the Myanmar-Bangladesh coasts, held in horrific conditions for weeks by traffickers who are demanding that passengers pay to be released, a spokeswoman said.

Anifah and Marsudi said the reasons behind the migrant exodus must be addressed but did not single out any country.

They recommended convening an emergency meeting of the 10-country Association of Southeast Asian Nations, which Malaysia currently chairs. Myanmar is also a member.