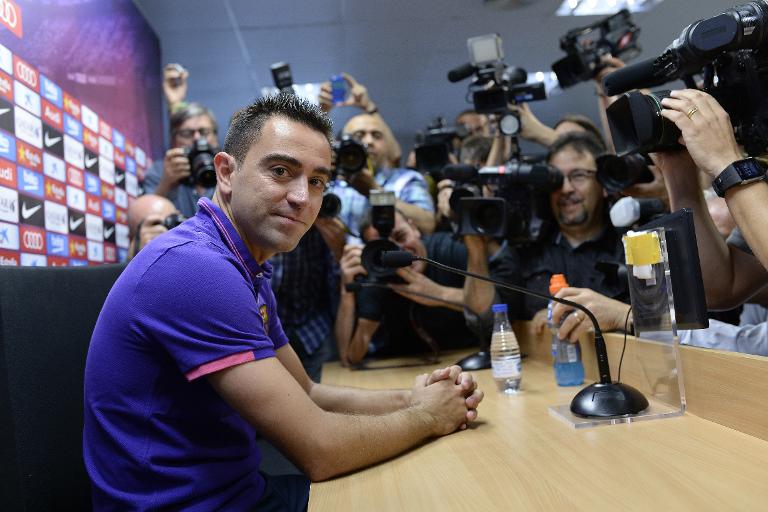 Barcelona’s most decorated player of all-time, Xavi Hernandez, announced on Thursday he will bring to an end a stellar 17-year playing career with the Catalan giants at the end of the season.

The 35-year-old will follow in former international teammate Raul’s footsteps by joining Qatari side Al Sadd in a major coup for the domestic football in a country set to host the 2022 World Cup.

Yet, before bidding farewell to his homeland for the Middle East, Xavi has two more titles to add to his collection of 23 trophies with the Copa del Rey and Champions League finals to come.

A fitting tribute will be paid to the man who has worn the Barca shirt more than any other on Saturday as the Blaugrana celebrate their La Liga title at home to Deportivo la Coruna.

The Copa del Rey final against Athletic Bilbao will be his final game at the Camp Nou on May 30 before he hopes to claim a fourth Champions League title against Juventus in Berlin a week later.

Win both and Barca will become the first club to win a treble of league, Cup and Champions League for the second time. It will also be a second for Xavi, having been at the heart of Pep Guardiola’s treble-winning side in 2008/09.

It could have been very different. Benched for the title decider against Atletico Madrid last season as Barca missed out on a major trophy for the first time in six years and the final two matches of Spain’s disastrous World Cup defence in Brazil, he seemed set for a move to Qatar 12 months ago.

“Last summer it would have been too early. I was downhearted with two big disappointments at the World Cup and here at Barca,” he said.

“Now we are capable and have the opportunity to make history. I am very happy to have stayed.”

Convinced to stay on for a final year by former teammate Luis Enrique, his illustrous Barca career has had the final curtain it deserved as demonstrated by his tears at clinching an eighth Liga title when the Catalans exacted revenge on Atletico last weekend.

Xavi was also an integral part of the Spain side that swept all before them in winning back-to-back European Championships in 2008 and 2012, as well as the country’s first World Cup in 2010.

His presence wasn’t just felt on the field in his metronomic passing as Spain’s flock of mini maestros led by he and sidekick Andres Iniesta gave birth to the technique reliant “tiki-taka” style at a time when the game was morphing into the age of the super-athlete.

Xavi’s success with the national team started well before Vienna in 2008 as he won the World Youth Championship in 1999 where a friendship with Real Madrid captain Iker Casillas first began.

Together they brought a solidarity to the Spain squad from both sides of the Barca and Madrid divide to overcome the tag of perennial underachievers, even after the incendiary events of four El Clasico clashes in 18 days in 2011 as Jose Mourinho attempted to burn bridges between the two squads.

“I don’t think there will be another player like him. He is an unique, inimitable player who has been instrumental to the club and the national team,” Iniesta said on Tuesday.

Fortunately for Xavi, Barcelona and Spanish football as a whole, he will leave as he deserves to; as a winner.