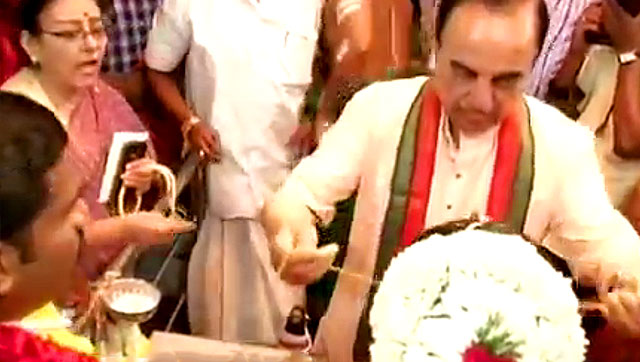 Indian politician Subramanian Swamy was saved from getting married again at 75 by mistake thanks to the timely intervention of a vigilant lady.

When he was asked to bless a Tamil wedding, by handing over the mangalsutra to the groom, Swamy blessed the thread and instead of handing it over to the groom, and in a spectacular moment of brain-freeze, went to tie it around the bride’s neck.

Thankfully, a lady standing next to the couple stopped Swamy just in time. She pulled his arm back.

Bala Subramanian, a former district president of the now dissolved Janata Party, had invited Swamy to bless his wedding with Veni in Tamilnadu’s Tirunelveli district on Wednesday morning, reports said.

Former IAS officer and president of the Tamil Nadu state unit of the Janata Party VS Chandralekha was also present at the ceremony.

Â It’s an old custom in Tamil weddings that a senior person hands over the mangalsutra to the groom, before he ties the knot. If the groom is a member of a political party, then usually the party leader does it.Â

In the video, an embarrassed Swamy is seen laughing-off his act as the groom ties the knot.Â

Since then, Swamy has become the butt of jokes of people for his absent-mindedness as the incident’s video soon went viral on social media.