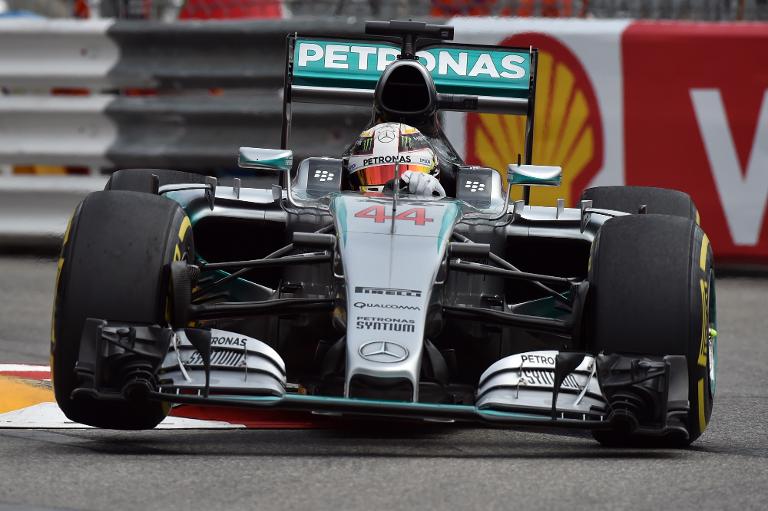 Lewis Hamilton oozed all the authority and skill of a champion on Thursday as he marked the confirmation of his new three-year contract with Mercedes by dominating both opening practice sessions for this weekendâ€™s Monaco Grand Prix.

The 30-year-old Briton, who was beaten into second place by his Mercedes team-mate Nico Rosberg at the Spanish Grand Prix two weeks ago, delivered a consummate performance in cool, treacherous and wet conditions on the unforgiving streets of the Mediterranean principality.

It was a perfect riposte to Rosbergâ€™s revival and confirmed Hamiltonâ€™s intention to win Sundayâ€™s classic 78-laps race and wreck his rivalâ€™s bid for a rare hat-trick of successive victories on his home town road track.

â€œItâ€™s been great, a good day so far,â€ said Hamilton after completion of an afternoon session interrupted by a heavy rain shower and a red-flag following an accident when Roberto Merhi lost control of his Manor Marussia car at the exit of the tunnel. He hit the barriers, but was unhurt.

â€œYou need to get on the pace quickly and find the time and be very specific with any changes you make,â€ said Hamilton. â€œAnd it is better not to make too many.”

Hamilton did one lap after the rain, in wet conditions, and said: â€œI think that the only thing I learned was that the white lines, which are painted black now, are slipperier than ever! This black paint is more slippery than the white. Other than that, you know, this is the hardest track to drive in the wet.â€

Rosberg was second fastest at the end of the day by more than seven-tenths of a second ahead of four-time champion Sebastian Vettel and his Ferrari team-mate Kimi Raikkonen.

Rosberg, 29, who is 20 points behind Hamilton in the title race, survived a â€˜momentâ€™ during the morningâ€™s opening session when he brushed the barriers at Tabac.

The incident ruined that lap and caused him to return to the pits, but left his car with no serious damage.

â€œIt wasnâ€™t a perfect day,â€ he said. â€œNot perfect weather for practice and I think that was a complete surprise. We all put on â€˜super-softsâ€™ for second practice and the rain came.

â€œThe good thing is that the car is definitely very quick so thatâ€™s good. There is more to come from me, for sure.

â€œThis is Monaco and you know you have to build up to it through Thursday and then Saturday and make sure you are there for qualifying.

â€œI feel pretty confident. I know there is more to come so I have to get down to it and do a great qualifying lap.â€

Hamilton clocked a best lap of one minute and 17.192 seconds before the rainstorm that curtailed afternoon action until the final 10 minutes.

Vettel was upbeat about his and Ferrariâ€™s prospects despite being comprehensively outpaced again by Mercedes.

â€œI think we should be closer again here so we are going to see,â€ said Vettel who won the Malaysian Grand Prix this season.

â€œObviously, some of that is down to the nature of the track. Everyoneâ€™s a little closer, so I donâ€™t think you can take Monaco as a reference, but for sure I think that we are closer.â€

Russian Daniil Kvyat of Red Bull was fifth and the talented young Spaniard Carlos Sainz in a Toro Rosso was sixth.

Dutch teenager Max Verstappen continued his extraordinary impact this season by taking seventh in the second Toro Rosso car ahead of a much-improved performance from two-time champion Spaniard Fernando Alonso in the troublesome McLaren-Honda.