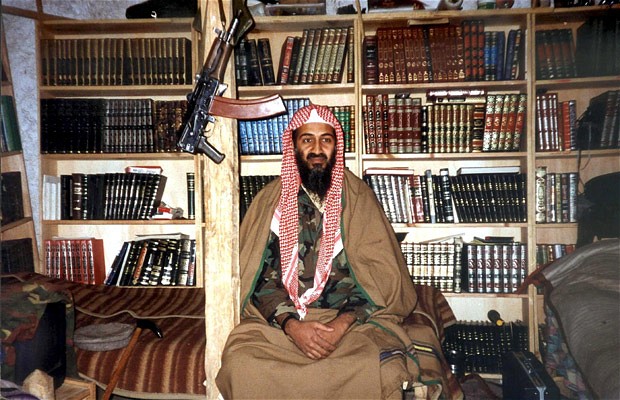 US intelligence officials have released more than 100 letters and documents found during the raid that killed Osama bin Laden in 2011, revealing the al-Qaida leaderâ€™s intense fear of drones and surveillance, correspondence with his family, and continued preoccupation with launching attacks against the west.

Alongside scores of declassified Arabic documents â€“ mainly correspondence with key lieutenants, associates and groups spread around the Islamic world â€“ the Office of the Director of National Intelligence also released the contents of Bin Ladenâ€™s library, including works by Islamist thinkers, but also English language books on history and current affairs by authors including Noam Chomsky and Bob Woodward.

The documents were released after a â€œrigorous interagency reviewâ€ led by the CIA, said Jeffrey Anchukaitis, spokesman for Director of National Intelligence James Clapper. Anchukaitis said the review continues, but that â€œgiven the large number of documents to review, and the increasing public demand to review those documentsâ€, the White House asked for them to be released as they were ready.

The documentsâ€™ release follows a high-profile and intensely debated article by the veteran investigative journalist Seymour Hersh, which accused the Obama administration of misleading the public over events before, during and after the May 2011 raid that killed Bin Laden.

Anchukaitis denied that the release of documents was related to the Obama administrationâ€™s pushback against Hershâ€™s report.

The declassified documents reveal Bin Ladenâ€™s abiding concern with operational security. In letters, he tells his lieutenants not to communicate by email and tells them not to gather in large groups, lest they become the target of a drone strike.

The internet â€œis OK for general messages,â€ Bin Laden writes his deputies, â€œbut the secrecy of the mujahideen does not allow its usage and couriers are the only wayâ€. In other documents he advises members of al-Qaida to destroy cellphone Sim cards, to keep prescriptions with them to avoid frequent visits to doctors, and to learn Urdu because â€œit is also of extreme importance, security-wiseâ€.

In one missive, he worries over the possibility that a wiretap could be concealed in his wifeâ€™s clothing.

â€œBefore Um Hamza arrives here, it is necessary for her to leave everything behind, including clothes, books, everything that she had in Iran,â€ Bin Laden wrote in a September 2010 letter. â€œEverything that a needle might possibly penetrate.

â€œSome chips have been lately developed for eavesdropping, so small they could easily be hidden inside a syringe,â€ he said, adding that â€œIranians are not to be trustedâ€ and a listening device could be planted in his wifeâ€™s belongings.

Bin Laden also fixates on his al-Qaida heirs, including how to get his son Hamza into Pakistan, and about what precautions the group can take against drone strikes.

In other letters, he pleaded with his lieutenants to turn away from internecine and regional attacks and to concentrate on major plots against the US.

â€œThe focus should be on killing and fighting the American people and their representatives,â€ Bin Laden wrote in one of the documents. â€œWe should stop operations against the army and the police in all regions, especially Yemen.â€

In one undated report, he wrote of â€œa number of brothersâ€ sent to attack Britain, Russia and Denmark, including a plan to blow up a gas line or an American embassy. He issued orders on a granular level of transportation and explosives manufacturing, and blamed â€œbad luckâ€ for the failed plots, saying â€œGod wasnâ€™t on our side.â€

When uprisings erupted in Tunisia, Egypt, Syria and around the Middle East, he urged al-Qaida leaders to seize the moment of â€œrevolutionâ€ to recruit young people around the region to his cause.

Bin Laden also exhorted al-Qaida to move away from small, local attacks in the region, but found himself marginalized within the organization, as lone wolf, â€œindividual jihadâ€ attacks gained increasing prominence for other al-Qaida leaders.

In another document, he cites the unpopularity of the Vietnam war in the US and says that the only way to change American policy is to â€œstart striking America to force it to abandon these rulers and leave the Muslims aloneâ€.

The titles included in Bin Ladenâ€™s personal library reveal an eclectic reader with a predictable taste for classics of jihadi literature, a deep interest in both US foreign policy and a keen desire to see how his own organisation was being portrayed in the international media.

There are two works by Bin Ladenâ€™s mentor, Abdallah Azzam: Join the Caravan and The Defence of Muslim Lands, both of which remain hugely influential among radical Islamists. Azzam led Arab â€œmujahideenâ€ during the war against the Soviets in Afghanistan and laid down fundamental principles of violent Islamic extremism.

Bin Laden also had a copy of The America I Have Seen, a vitriolic memoir of a short trip to the US by the Egyptian thinker and activist Syed Qutb, considered the godfather of modern jihadi thinking.

The collection also included several works on international relations and current affairs, including Obamaâ€™s Wars by Bob Woodward, Hegemony or Survival: Americaâ€™s Quest for Global Dominance by Noam Chomsky, and the Best Democracy Money Can Buy by Greg Palast.

Bizarrely, the library includes several works by conspiracy theorists, including New Pearl Harbor, which argues that the government of George W Bush was complicit in the 9/11 terror attacks, and Bloodlines of the Illuminati, which claims to reveal the secret network of power-brokers who rule the world.

Bin Ladenâ€™s letters reveal the al-Qaida chief as a dedicated family man who worries about his four wives, 20 children and other relatives and offered detailed advice and instructions on how to behave.

â€œBy God, I miss you so much,â€ he writes in an undated letter to his daughter, Umm Muadh. He asks how her son is progressing with his studies of the Quâ€™ran and other school subjects. â€œWhat is his latest funny news?â€ he asks. The letter is short, he says, because â€œthe power keeps going on and off.â€

In another he asks that one of his wives take care of his daughters, â€œand be careful of bad company for them, especially after pubertyâ€.

â€œIf you can marry them to mujahideen, then that is best, or else to good people,â€ he wrote.

Another declassified document is apparently an application for membership in al-Qaida, and features such questions as: â€œWhat is your favorite material: science or literature?â€, â€œDo you wish to execute a suicide operation?â€ and â€œAny hobbies or pastimes?â€ It ends: â€œWho should we contact in case you become a martyr?â€

Notable by its absence in the document trove is Bin Ladenâ€™s collection of pornography.

At the time of the Abbottabad raid, Navy Seals reportedly uncovered a â€œfairly extensiveâ€ cache of pornography, to include modern-seeming videos.

Clapperâ€™s office confirmed that the documents recovered from the compound included â€œsome pornographic materialâ€. But Anchukaitis said the US would not release the pornography â€œdue to the nature of their contentsâ€. He declined to give any further details.