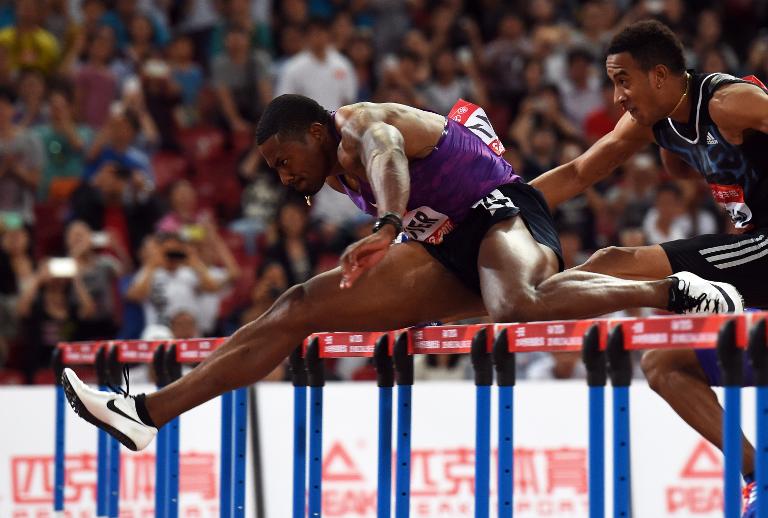 Oliver, three months before he intends to return to the Bird’s Nest stadium to defend his world title, lowered his 13.17 set at the Shanghai Diamond League on Sunday as he again beat Cuba’s Orlando Ortega into second.

Jamaica’s former Olympic champion Veronica Campbell-Brown won the women’s 200m in 22.68 and American Marvin Bracy won the men’s 100m in 9.95, in the absence of Gatlin.

The drug-tainted American, who ran the year’s fastest 100m of 9.74 on Friday in Doha, claimed he had been expelled by organisers who believed he was carrying an injury.

But Beijing meet officials said they were “perplexed” by Gatlin after he said he had been treated disrespectfully.

“(Gatlin’s manager Renaldo) Nehemiah did not communicate with us before he announced Gatlin’s withdrawal at yesterday’s news conference,” said organising committee deputy director Liu Jie, according to Xinhua news agency.

He added: “And we never got to speak with Gatlin in person.”

Gatlin, who served a four-year doping ban until 2010, tried to play down the incident, blaming high emotions for his strong comments to media.

“Emotional day. All is fine with Beijing org & me,” he tweeted. “We have a great relationship and I look forward to being there in Aug for worlds & next year for the meet.”

Gatlin had told reporters he wanted to run despite suffering cramps after arriving from Doha, where he ran his world-leading 9.74 — a personal best at the age of 33.

The time threw down the gauntlet to Jamaican star Usain Bolt before both men are expected to face each other in Beijing at the world championships in August.

Elsewhere in Beijing, Kenya’s Alfred Kipketer won the men’s 800m in 1:45.45, and his fellow countryman Jonathan Muia Ndiku took out the steeplechase.

And there was success for hosts China when Wu Shujiao won the women’s 100m hurdles, Xue Changrui claimed the men’s pole vault and Zhang Guowei was the men’s high jump winner.