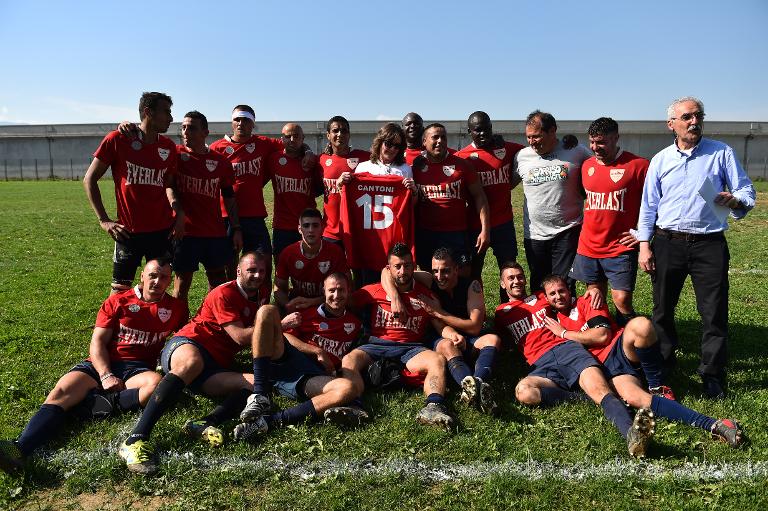 It is, according to former Italy international Walter Rista, a sport with respect for the rules written into its DNA.

So what could be better than rugby as a means of helping prisoners involved in a groundbreaking Italian rehabilitation programme prepare for their return to the outside world.

“The very fact that they are in prison means they have lost a sense of the rules, somewhere along the way,” says Rista, the founding father of La Drola, an inmate XV that performs a “jailbird Haka” before matches in the fifth tier of Italian rugby.

“Rugby channels the aggression that we all have inside us,” the 70-year-old adds, as he explains why the prison system teamed up with the national rugby federation to create a club whose name means “strange” in the local Piemontese dialect.

“In prison everyone only thinks of themselves,” Rista adds. “Here, on the pitch, in contrast, everyone thinks about others, about support, which is the essence of sport, and of life.”

Most of the players had never laid hands on an oval ball before finding themselves locked up. But according to Rista, something about incarceration produces quick learners.

Normally with a new group of players a full season is required “to form something resembling a team,” he says. “Here, after two months they are acting, mentally at least, like a real team.”

Gheorghita, a hulking, tattooed 35-year-old from Romania, was one of the uninitiated. “I’d heard of it but didn’t understand a thing about it,” he said. “I thought ‘who are these idiots brawling with each other?’

“But soon it gets under your skin and you understand that it is a great sport and, despite the blows, it is very clean and honest.

“Rugby has given me something I hadn’t found in prison – a way of letting off steam without any consequences.”

Members of the squad are selected on the basis of their physical and psychological potential from prisons all over Italy. They share a common living space and 12 cells at the Lorusso and Cutugno detention centre, located just a mile from football club Juventus’s stadium.

Their unique status means they required a special exemption from the league they play in to be allowed to play every fixture at home, under the gaze of guards in the watchtower and surrounded by barbed wire.

Any advantage is offset by the league imposing an eight point penalty on La Drola at the start of every season because the club does not comply with a requirement to run a youth team. This bizarre example of Italian bureaucratic rigidity is, says Rista with commendable understatement, a “little silly”.

Robert, a 38-year-old Albanian, says playing rugby gives him a feeling of being truly alive.

“When you play all the years of being locked up are cast off and you feel a bit free, spiritually.”

Wissen, a 27-year-old Tunisian says he wishes he had discovered rugby much younger. “Things would have turned out better for me, I swear,” he said.

“I made mistakes and I’m paying for them now. I understand that and that’s thanks to rugby.”

Vincenzo, a Neapolitan nicknamed “Midnight” after a TV mafia character, is one of only five Italian nationals in the team. He says he feels like a different person when he plays.

“Matchday is the best day of the week, the training as well,” he said after La Drola’s final match of this season, a 24-19 win over Biella in which he scored the opening try.

“When I touch down it is a fabulous moment, I always allow myself a dive,” he said with a smile.

There are no post-match beers but rugby tradition is observed with the opposition invited for pizza and mineral water.

Visiting stand-off Andrea Fizzotti admits his first experience of playing in a prison was a little strange. “It was a bit oppressive feeling at first, but you get used to it very quickly.

“They are just guys like us who want to play rugby.”

Despite the points penalty, La Drola finished the season in third place, thanks in part to the time the prisoners can spend building muscle in the gym, but also to an admirable team spirit and a handful of players with high skill levels.

Since the project was started, a total of 65 players have worn La Drola’s jersey. Half of them have now left prison and around 15 are playing regularly on the outside.

“That fills me with satisfaction,” says Rista. “The litmus test for this project is what happens when they get out. If they have understand that they can live a life without crime we will have done our job.”