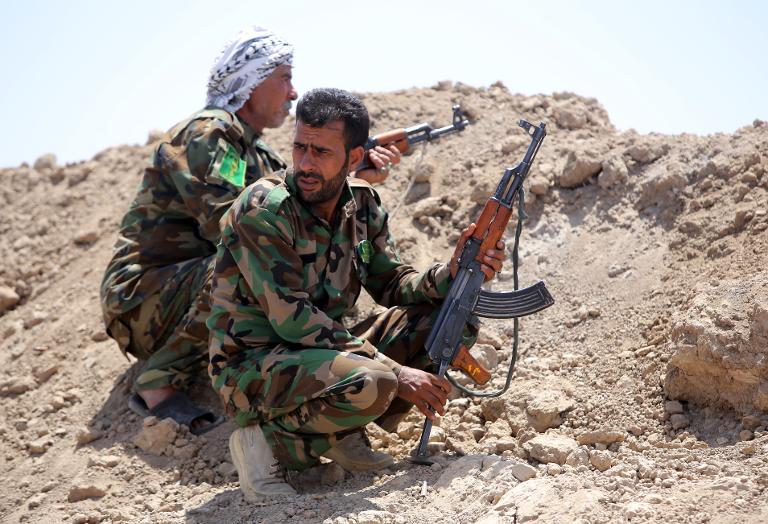 Iraq’s army and allied paramilitary forces massed around Ramadi, looking for swift action to recapture the city from the Islamic State group before it builds up defences.

With his security strategy in tatters and his authority facing its biggest challenge since he took office eight months ago, Prime Minister Haider al-Abadi was looking for quick redemption.

But the jihadists, whose capture of Ramadi on Sunday showed they may have been written off too soon, tried to keep up the momentum by attacking government and allied forces east of the city.

“We are looking at how best to support local ground forces in Anbar” province, National Security Council spokesman Alistair Baskey told AFP, “including accelerating the training and equipping of local tribes and supporting an Iraqi-led operation to retake Ramadi”.

Abadi has “ordered the setting up of new defence lines in Ramadi, to reorganise and deploy the fighting troops”, his office said after talks with Iran’s defence minister.

Reeling from the worst setback since IS grabbed swathes of territory in June last year, Abadi called in the Shiite-dominated Popular Mobilisation units (Hashed al-Shaabi).

He and Washington had hoped to rely on regular forces and locally recruited Sunni tribal fighters newly incorporated into the Hashed al-Shaabi.

Such a solution was seen as more palatable to the population of Anbar, a predominantly Sunni province, and a way for Washington to keep Iranian-backed militias at bay.

The Shiite paramilitary groups had been eager to join the Ramadi battle for some time and argued that Abadi’s reluctance led to the provincial capital’s fall.

Following a belated green light, they started sending convoys of fighters to Anbar, where anti-IS forces are massing, mostly east and west of Ramadi.

“The US government and Iraqi government seem to be on the same sheet of music that Ramadi has to be counterattacked before IS consolidates,” Michael Knights of the Washington Institute said.

US Secretary of State John Kerry said on Monday he was “absolutely confident” the situation could be reversed within days.

In the other half of IS’ self-proclaimed “caliphate”, a monitoring group said US-led air strikes in the northeastern Syrian region of Hasakeh had killed 170 IS militants in 48 hours.

“This area will be the starting point for the operations to liberate the cities of Anbar,” he said.

But much planning remains to be done before Iraqi forces attempt to move back into Ramadi, a large town on the Euphrates about 100 kilometres west of Baghdad.

“The military operation to liberate Ramadi and Anbar will not start until all the requirements are met,” Fahdawi said.

Analysts say Washington’s strategy of carrying out air strikes while the Iraqi military is trained up has shown its limits.

After holding on for a year and a half during which the jihadists never managed to take full control of the city, Iraqi security forces pulled out of their last bases on Sunday.

The retreat was chaotic, with groups of fighters leaving without command approval and others left stranded by their comrades.

At least 28 of them were plucked to safety in a dramatic helicopter rescue, footage of which has been aired on state TV, but many were killed and more are still missing.

The withdrawal also raised the question of the effective control the command had over its men and Iraq’s cabinet on Tuesday suggested the defence of Ramadi had been less than heroic and could have been avoided.

In its cabinet meeting decisions, it supported “honouring the fighters who resisted the terrorist attacks and imposing the toughest punishment on the recalcitrants, whose attitude had consequences for Ramadi”.

According to an official in the Anbar governor’s office, at least 500 fighters and civilians were killed in the three-day blitz leading to Ramadi’s fall.

IS released pictures of the spoils they retrieved from abandoned government bases, including tanks, armoured personnel carriers and other vehicles, as well as weapons and ammunition.

The group also released pictures of the moment when its fighters freed prisoners held at a counterterrorism detention facility.

According to the International Organisation for Migration, fighting has forced 40,000 people from their homes, the second time in a month Ramadi residents had to flee.

“Thousands of people had to sleep in the open because they didn’t have places to stay,” said the UN’s humanitarian coordinator, Lise Grande.

Officials said five displaced people, including two children, died Tuesday at the Bzeibez bridge where thousands have been waiting to cross into Baghdad governorate.