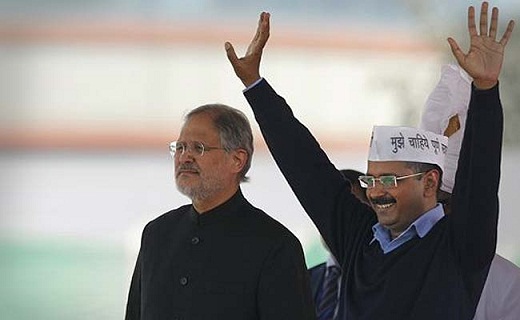 New Delhi: The one-upmanshipÂ tussle between Delhi Chief MinisterÂ Arvind KejriwalÂ and Lieutenant GovernorÂ Najeeb JungÂ escalated further as the latterÂ on Wednesday cancelled all orders issued by Delhi government in the last four days regarding transfer and posting of officials.

The order came after days of bitter war of words between the two sides over the appointment of senior IAS officer Shakuntala Gamlin as acting Delhi Chief Secretary.

Both the sides are claiming to have the power and authority over the other to choose bureaucrats and have knocked the doors of Rashtrapati Bhawan over the issue.

Earlier, Kejriwal took his fight against the LG to Prime Minister Narendra Modi, Â as the Delhi chief minister asked him to allow the city government to function “independently” even as he accused the Centre of trying to run the Delhi administration.

In a letter to Modi, Kejriwal mentioned the posting and transfers made by Lt Governor Najeeb Jung and said the elected government must have a say about distribution of work to senior officials.

“In Delhi, Central government is trying to run government unconstitutionally through the Lt Governor. Let Delhi government function independently,” Kejriwal said in the letter to Modi.

The letter by Kejriwal to the Prime Minister came a day after both he and Jung took their bitter fight to President Pranab Mukherjee, accusing each other of violating the Constitution and overstepping their respective jurisdictions.

The Lt Governor has been maintaining that he has the power to appoint and transfer the bureaucrats and none of his actions has been “unconstitutional” as was being alleged by the AAP government.

Kejriwal had on Tuesday met Mukherjee along with his deputy Manish Sisodia, who said “LG was functioning as if there is President’s Rule in the national capital and there is no elected government here.”Â