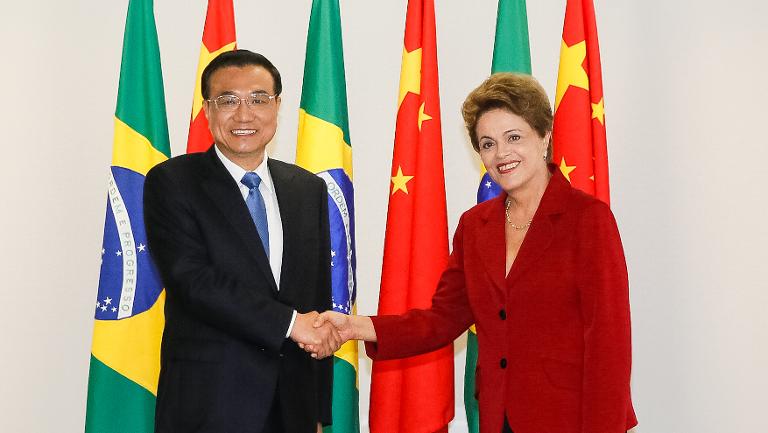 Chinese Premier Li Keqiang lifted the wraps Tuesday on a multibillion-dollar series of trade and investment deals with Brazil, as Beijing looks to invest $53 billion in South America’s largest economy.

The news unveiled at the start of Li’s first official visit to Latin America is a huge boon for Brazil as it endures a fifth straight year of low growth after a period of rapid expansion fueled by Asian demand for commodities that has since slowed.

Headlining 35 deals on Li’s first official visit to Latin America were a pair of finance and cooperation agreements worth $7 billion for Brazil’s state-owned oil firm Petrobras.

Rousseff, who will make a state visit next year to China, spoke of a “new intensity in our relations.”

“China and Brazil are playing a leading role in the construction of a new global order,” she added.

Rousseff, re-elected in October, has been battling a welter of negative economic data as well as fallout from a huge graft scandal at Petrobras.

Li pointed to China’s “rich experience” in building infrastructure, saying Beijing “would like to cooperate with Brazil in reducing its costs.”

Despite a multibillion-dollar kickbacks scandal battering its reputation as Brazil’s flagship company, Petrobras had earlier this year received another Beijing boost in signing a $3.5 billion financing deal with the China Investment Bank.

Despite becoming Brazil’s number one trading partner in 2009, amid an exponential rise in two-way trade, China currently ranks only 12th in terms of actual investment in Brazil, prompting Brasilia to seek deeper economic ties.

The Chinese are notably supplying new metro trains and catamarans to Rio and Li will visit the Olympic host city Wednesday to inspect those investments before leaving Thursday for Colombia ahead of trips to Peru and Chile.

Li’s tour, aimed at underpinning growing Chinese influence in Latin America, comes just days after Beijing signed accords worth $25 billion and $22 billion respectively with fellow BRICS developing nations Russia. But the Brazil package is worth more than those combined.

Aside from the Petrobras agreements, Rousseff and Li also signed a range of deals designed to further bilateral cooperation on trade, investment, agriculture, energy and transport.

Brazil’s Vale, the world’s biggest iron producer, announced a range of deals including extended cooperation with China on maritime transport of iron ore.

Among the deals, Vale said it would expand an existing accord by selling four ore carriers to China Merchants Energy Shipping Co. Ltd and also also signed a memorandum of understanding with the Industrial and Commercial Bank of China for up to $4 billion in loans and other financial arrangements.

China also vowed to lift an import ban on Brazilian beef and signed onto an ambitious project to build a railway from the key southeastern Brazilian port of Santos more than 3,500 kilometers (2,200 miles) to the Peruvian Pacific port of Ilo.

Bilateral trade between the BRICS developing states has mushroomed over the past decade, with the Asian giant becoming Brazil’s main trading partner in 2009.

Ahead of Li’s arrival late Monday, Jose Graca Lima, head of Asian affairs in the Brazilian foreign ministry, explained that a “second generation” of Chinese investment is underway, switching from trade in raw materials to heavy industry and infrastructure.

Facilitating the movement of imports from Brazil — and similarly that of its own exports to Latin America — is a key Chinese aim, pushing their interest in funding the mooted $10 billion railway project through to Peru.

Building the rail link would mean that “a new path to Asia will open up for Brazil, reducing distances and costs,” Rousseff told reporters.