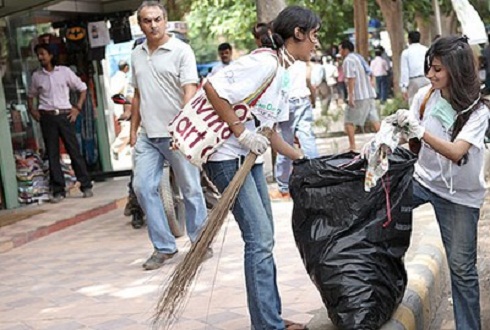 New Delhi: When Prime Minister Narendra Modi put out the idea of ‘building toilets before constructing temples’ in New Delhi more than a year ago, he unleashed a mass movement for public cleanliness raising eyebrows in both political and social circuits.

In a 360-degree publicity campaign, Modi has inspired and urged, scolded and set targets. Ministers and officials have been made to brandish brooms, whether or not they want to.

However, no one batted an eyelid when recently a drain in the capital choked and overflowed, with stinky water meandering its way leaving a dirty trail right to the stairways of a mosque and a temple.

Though the incident pertains to a small neighbourhood inside the Turkman Gate area of Old Delhi, a little bit of scratching on the surface results in the emergence of a rusted base.

The spot is merely four steps away from a government girls’ school and two kilometers away from the Rajghat where Modi’s ‘Swachh Bharat Abhiyan’ was officially launched from just six months ago and which now has a budget allocation of whopping Rs. 3,625 crores for fiscal year 2015-16.

When the civic problem was raised with the area MLA Asim Ahmed Khan, the residents were told to make a written complaint and submit in the relevant office for the possible action to be taken. NewsMobile tried to get in touch with Khan, but he was unavailable for comment.

Realising that it would be too much of red tape, which might consume lot of time when the immediate action is required to avoid diseases spread in the locality, the area’s councilor, Seema Tahira, was contacted.

Initially a bit reluctant to avoid interfering in the MLA’s domain, Tahira swung into action and not only got the drain repaired within a few hours, but personally oversaw the repair work in the sweltering afternoon.â€People have put me into power and Iâ€™ll take care of my ward and serve the citizens,â€ Tahira told NewsMobile.

Urban India generates 68.8 million tonnes of trash a year. More than 6,000 tonnes of plastic waste is littered and uncollected daily, adding to the soaring mountains of non-biodegradable trash. By 2047, 1,400 sq km of land, or the total area of Delhi metropolitan region, will be required just for municipal waste. Seventy eight per cent of sewage is untreated, dumped in rivers and lakes, and allowed to seep into the groundwater.

Even today, only 33% of rural households have toilets. In 2006, this sanitation deficit was estimated to have shaved off nearly 6.4% of the GDP. But these numbers aren’t even the half of it.

Cleanliness and sanitation are not one party’s pet projects and they should not be. No wonder, when Modi launched the multi-million cleanliness scheme, he rose above the party lines and nominated leaders across party lines to take up the broom.

Last year, Modi was invited to the Global Citizen Festival in New York’s Central Park along with Jay-Z, Beyonce, Hugh Jackman and The Roots to promote awareness and means to fight poverty.

The organizers were specifically keen on the Indian Prime Minister addressing a 60,000 strong audience for his high-pitch pledge to cleanliness drive and expand sanitation in the country.

At times, one needs to rise above partisan politics and contribute to the projects for the larger interest and betterment of the people something which the female councilor did in a tiny but significant corner of the country.