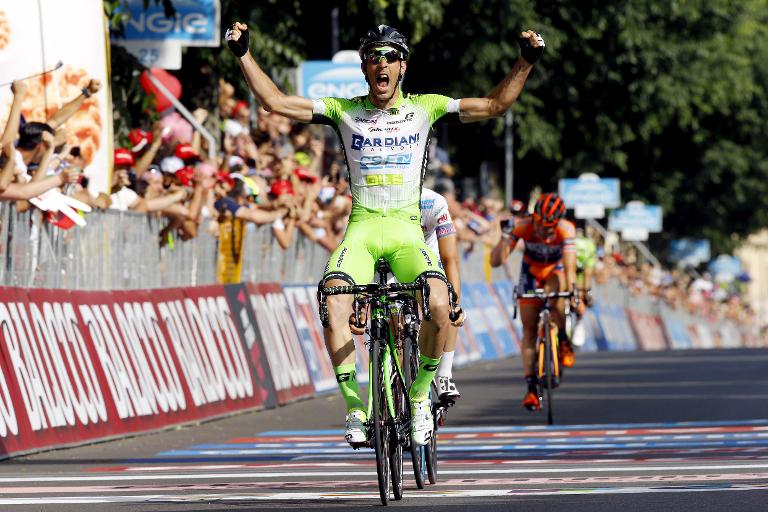 Italy’s Nicola Boem of the Bardiani team won the 10th stage of the Tour of Italy on Tuesday with Spanish great Alberto Contador retaining the leader’s pink jersey.

It was the biggest win for 25-year-old Boem since turning professional in 2013.

Contador had an extra bonus in his bid to win the Giro as one of his main rivals, Richie Porte, lost valuable time in the stage itself.

He was subsequently penalised another two minutes after the Sky rider was helped by fellow Australian Simon Clarke from the Orica team to mend a puncture — race rules forbid riders from different teams helping rivals.

Boem, whose team is made up of young Italian talent who are regularly invited to compete in the race by the organisers, said: “We were targeting a stage win at this Giro, and it has come in the flattest, most unlikely stage.

“We worked together and with 20km to go we had a good advantage. With 1.5km to go, Alan Marangoni attacked.

“I knew I couldn’t let him get away so I just gave it everything. I dedicate the win to my team-mates, who are probably even happier than I am, and to my girlfriend Federica, who has believed in me and encouraged me every day at this Giro.”

Porte, who had been sitting third going into the stage just 22sec behind Contador, lost ground on his rivals, the puncture in the final five kilometres costing him dearly.

Even though several of his team-mates waited for him and tried to help him get back to the peloton the 30-year-old was barely able to stick with his Sky colleagues and, with the penalty, is 3min 09sec behind the Spaniard.

Contador, who is bidding to become the first rider to pull off the Giro/Tour de France double in the same season since the late Marco Pantani in 1998, sympathised with Porte and revealed he hadn’t found the stage easy either.

“Every day at the Giro can hold surprises.

“The other day it was my crash. Today Richie had an unfortunate puncture. It is always annoying to lose time that way although, with everything that lies ahead of us, the time lost is very small.”

Porte’s team sporting director said he hoped such mishaps would not influence the overall outcome.

“I hope that the fate of the Giro will not hang on a mechanical problem or a fall like what happened to Contador the other day (he dislocated his shoulder last Thursday),” said Dario Cioni.